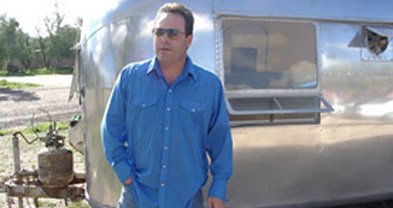 Mark Stuart & the Bastard Sons of Johnny Cash have released several CDs containing their own original songs, beginning with a six-song EP in 1998.

“We aren't a tribute band,” said founder/front-man Stuart. “We never set out to be a tribute band.” Yet, the 2006 European release of Walk the Line helped the Bastard Sons book a 30-date European tour. In 2006, the band toured Switzerland, Austria, Germany, France, Holland, Belgium, Ireland, Scotland, and England.

Were the Bastard Sons endorsed by the Cash estate?

“We weren't endorsed by the Cash estate,” says Stuart. “We were endorsed by Cash himself...I met him at the House of Blues in Los Angeles in 1998. We were invited to his house in Hendersonville, Tennessee, where we recorded songs for our first record. He told us he would be honored if we were his bastard sons.”

In 1998, the Bastards received an invitation to perform for over 20,000 attendees at Willie Nelson’s annual Fourth of July Picnic in Luckenbach, Texas, the first San Diego band ever invited to the three-decade-old institution showcasing cutting-edge artists in country music.

In 2006, Stuart moved to Austin, Texas, nearby where local Rosie Flores also relocated. “I needed a change. I just had a divorce.” Plus there was that music thing.

“There are over 300 music venues there. A lot of my friends had already moved there....” Stuart namechecks SD refugees Dave Gonzales of the Paladins, Cella Blue of the West Coast Pinups, and Billy Bacon of the Forbidden Pigs. “Rosie Flores was my next-door neighbor.” Stuart and his band had played South by Southwest six times. However...

"You’re basically like a freak of nature playing country music in San Diego," he told steamboatpilot.com (10-31-08), "so I needed to get to where my peeps were. It was just overdue. It’s like the old joke. What’s the difference between a pizza and a honky-tonk singer in San Diego? A pizza can actually feed a family of four."

In addition, “It was easier to find full-time musicians who could do road work. Also,” he says, “I went there to immerse myself in the vibrant Americana and country music scene, to earn my Texas spurs so to speak.”

In September 2009, Mark Stuart & the Bastard Sons released their album Bend in the Road on Stuart's Texacali Records, distributed by Dualtone. Around the same time, their song “Train’s Gonna Roll” was featured in an episode of HBO’s True Blood.

Stuart moved back to San Diego in November, 2010, though BSOJC never disbanded during the years he lived abroad. Being the only original member, he used a rotating crew of musicians local to San Diego such as Alex Watts and Dave Berzansky when performing here. Stuart says he traveled whenever there was a booking. “Seems like there were a lot of fly-ins from Austin during the summer when the Texas heat turns brutal.”

Stuart says he produces two or three albums a year for other artists.

“Last year, I spent about 180 days on the road, so I could actually live anywhere.” But, he says his new wife, a Texas native, fell in love with San Diego, which triggered Stuart’s move to La Jolla. “It’s where I was born. As much as I loved the Austin music scene, it wasn’t so amazing that it would keep me from moving home. It’s nice to not have to come home from a tour to 100-degree heat.”

But things were a little different in late 2010. The Belly Up was one of the Bastard Sons’ more popular venues before the move. Weekends used to be reserved for original bands, but now cover bands may play the Belly Up on any given Friday or Saturday.

“I’m just trying to get a handle and find out where somebody like me fits in [in the San Diego music scene] and see what venues are still out there. I’m still trying to reconnect with people. I’m going to find out what scene is still here and try and create our own piece of Americana with whatever industry and scene is still here. I think there are plenty of outstanding roots musicians in San Diego, whether the support network is out there or not.”

As of 2011, Stuart had regrouped with three members of the Bastard Sons who were with him before the move to Texas. In July, they toured Scandinavia.

They kicked off the first night of SXSW 2013 at the legendary Broken Spoke in Austin, TX. A few months later, “The Stuarts are relocating back to Austin next month,” said bandleader Mark Stuart. “Time to bring our beautiful baby girl Sofia and my wife back to the loving arms of her family and friends.”

The band still regularly lays San Diego. Says Stuart, “We come back once or twice or year. I have my Austin Bastards, and these supporting musicians are my regular San Diego Bastards.”