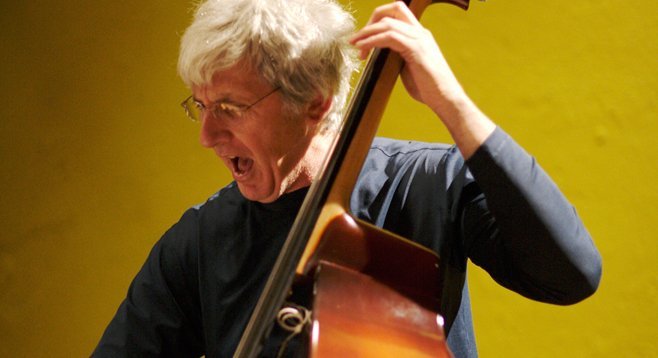 "During the late '70s," he recalled for the Reader, "I was on the CETA program with a jazz quintet. We played two to three concerts a day, five days a week, at different schools, rest homes for the elderly, and hospitals. One afternoon, we were booked at the downtown branch of San Diego County Mental Health. The patients were clearly heavily sedated, as well as being fed lots of sugary sweets. As we positioned ourselves and our amplifiers to play outdoors, we started our set with the high energy Eddie Harris classic, 'Freedom Jazz Dance.'"

"Literally within seconds, there was violence when a man attacked a woman. It felt like a chain reaction to the music. After he was restrained, the same woman was by the side of the bandstand, spitting in our direction. I was deeply affected by this gig. The next time we returned there to play, we played acoustical, performing Stevie Wonder tunes, and no one had to be subdued."

After a 1983 trip to Italy to study with Franco Petracchi, Dresser joined Anthony Braxton's quartet with whom he performed and recorded for nearly a decade. This group was documented in Graham Lock's book Forces in Motionand in numerous recordings.

It was during this period that Dresser performed a 1999 set at the Library of Congress in Washington, DC. "I was commissioned by the McKim Fund at the Library of Congress to compose 'Air to Mir,' for violin and piano, written expressly for my friends and esteemed colleagues Denman Maroney [piano] and violinist Mary Rowell," Dresser told the Reader. "Following this premier, I performed a set with my cooperative group, Arcado String Trio. The performance was unforgettable. Part of the reason was the sound in the Garfield Recital Hall was totally amazing, so transparent. I was told that it was acoustically tuned for the Budapest String Quartet who had been in residence there."

Dresser left New York in 2004, to accept a teaching position at the music department at UC San Diego.

At the core of the bassist's muse is a direct connection to the blues. Originally inspired by Charles Mingus and Jimi Hendrix, Dresser's compositions constantly up the ante on how far traditional elements can be stretched. His bass technique is chock full of seemingly impossible maneuvers, which he pulls off with a maddeningly casual ease.

Dresser pushes the sonic limits of the instrument, aided by custom-made electronics. A chapter on his extended techniques for contrabass, "A Personal Pedagogy," appears in his book ARCANA. He received a 2003 Grammy nomination, two NYFA grants, Meet the Composer commissions, and commissions from sculptor Robert Taplin and flutist Matthias Ziegler.

He has worked as a professor of music at the University of California, San Diego, and has also been a lecturer at Princeton University, the New School University, and Hampshire College. As of 2011, his band included saxophonist Tripp Sprague, trombonist Michael Dessen, pianist Joshua White, and drummer Duncan Moore.

In April 2011, he played five “telematic” concerts (with performers in different cities using the Internet 2, and state-of-the-art hardware and software to play together, in real time). He then flew back east for a recording of Anthony Braxton's music on the Tzadik label with pianist Marilyn Crispell and drummer Gerry Hemmingway.

The following month, Dresser toured Germany, Austria and the Netherlands with Trio M, gave workshops, performed concerts, and made a recording in Israel with tenor saxophonist Assif Tsahar and Hemmingway. In June 2011, he played a sold out concert in NYC with his quintet, and recorded a Trio M session for the German record label ENJA, to be released this fall.

He then flew to Portugal to teach two workshops and perform John Cage’s “Four 6.” In August, he and vocalist Jen Shyu released a CD on the Pi Recordings label called Synastry. Shyu excelled as a prodigy on piano and violin before she began singing. Trained in classical music, opera and jazz, she is also a committed ethno-musicologist, having studied Balinese gamelan music, and the folk music of Taiwan, East Timor, and Cuba.

In summer 2015, the jazz bassist was one of seven recipients to receive the Doris Duke Impact Award, splitting an $80,000 award with other nationwide proponents of the arts. The following year, he released a new CD, Sedimental You.

"The title of the CD is a tongue-in-cheek variant of Sentimental You," Dresser told the Reader. "The idea of sediment refers to the layers in the music, and particularly the title tune. The idea of layering is also an operative metaphor that I’ve been attracted to for a long time." The band featured on the album includes Nicole Mitchell (flute), Marty Ehrlich (clarinet), Michael Dessen (trombone), David Morales Boroff (violin), Joshua White (piano), and Jim Black (drums).

His band the Mark Dresser Seven dropped their second album on the Portuguese record label Clean Feed in early 2019, Ain’t Nothing But A Cyber Coup & You. The title, he told the Reader, came because “Trump’s election felt like a political coup of sorts, and there was a rhyme in there and I couldn’t resist it. I’ll just chalk it up to my dark sense of humor.” In addition to the title track, there’s the humorous “Let Them Eat Paper Towels,” and two poignant tributes to recently departed musicians with San Diego ties: Arthur Blythe and Butch Lacy.

"Ain’t Nothing But A Cyber Coup & You is the second album by this group of gifted musicians, with Keir GoGwilt the only newcomer," says Dresser. "I am grateful for the generous musicality and invention displayed by all. As with the previous album, Sedimental You., these six new compositions share certain areas of focus: pieces for fallen friends, works of irreverent political nature, and some with purely musical agendas. There are also brief solo bass improvisations interlaced between the compositions, performed on a unique bass adaptation - The McLagan Tines - invented by the ingenious luthier, engineer, and musician, Kent McLagan. These are a set of seven graduated steel rods attached to a secondary bridge that touches the bass bridge, activating the resonant cavity of the bass."

"This music embraces jazz traditions more directly than my earlier recordings not for reasons of accessibility, but rather to infuse energy, beauty, and remembrance. I think particularly of Mingus, who inspires me as bassist/composer/bandleader to engage with our current dystopian landscape from a place of hope and positive potential. Even more than on the last album, I’ve also featured timbre not as mere effect, but on equal footing with thematic materials for narrative and expressive reasons."