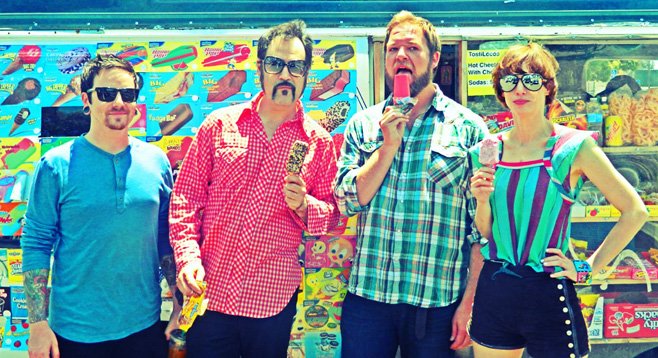 Formerly of Wild Weekend (themselves formerly a Zeros tribute band), frontwoman Maren Parusel struck out as a solo act in early 2009, at the age of 26.

"We just made these recordings for fun when we first started playing," says Parusel, who grew up in Tübingen Germany. After a 2005 trip to L.A. to work as a film studio intern, she went back home and made plans to move to the U.S. and attend City College in San Diego.

In late 2008, Wild Weekend was performing mostly originals, though most set lists still included the Zeros' "Black and White" and "Wild Weekend." After playing the South by Southwest music fest in Austin, Texas, in March 2009, the band broke up just days after returning to San Diego.

“It was my decision,” says Parusel. “I decided on the Monday after South by Southwest. My heart just wasn’t into it when I was onstage.”

Parusel has also been a member of Squiddo (with former Zero Hector Penalosa) and the Baja Bugs ("They're kind of rough").

Her debut EP Days in Universe was produced in 2009 by Jackson Milgaten (Vision of a Dying World) and Brian Karscig (Louis XIV). Parusel’s title track “Days in Universe” was featured in the 2011 comedy Conception starring David Arquette.

Parusel next signed up to be managed by Mario Escovedo, whose brother Javier is an original member of the Zeros. In May 2011, Escovedo’s label Requiemme Management, distributed digitally by music publishing giant Bug Music, released Parusel’s 13-song album Artificial Gardens.

For someone who writes beat-driven melodic pop songs, it may be a bit ironic that she sought out Paul Jenkins from Black Heart Procession to produce. He’s a man known for heart wrenching dark timeless epics, but he found the emotion in Maren’s songs and the two contrasted perspectives combined for a recording with songs that are yes, melodic and catchy, but poetic at the same time.

The CD release show for Artificial Gardens happened June 23, 2011, at Bar Pink. In August, it won Best Pop Album at the San Diego Music Awards. Parusel’s revamped synth-driven sound came around the same time, when her band equipment was stolen on tour in New York City, although Parusel says, “I was already beginning to change the way I made music.”

Her second full-length Tightrope Walker was released in spring 2012, via Requiemme Records/BMG Chrysalis, featuring tracks crafted from a perspective of growing up in Germany and contrasted with the experiences of living in sunny California.

Featuring layers of reverb-drenched guitar hooks with an assortment of vintage synths, the themes presented on the full-length were inspired by Nietzsche’s landmark book Thus Spoke Zarathustra and the documentary Man on Wire about a French highwire walker who traversed a line between the World Trade Centers in 1974.

“Metaphorically, life is you walking on a tightrope,” says Parusel. “You’re balanced on your own rope. You can slip and fall. This album is about believing in yourself rather than looking up to figures. It’s about living your own dream.” For the album, Parusel teamed up with Christopher Hoffee at Chaos Recorders in Escondido, whose array of analog synthesizers and vintage plug-ins lend dreamy, dance-friendly textures to Parusel’s falsetto vocals.