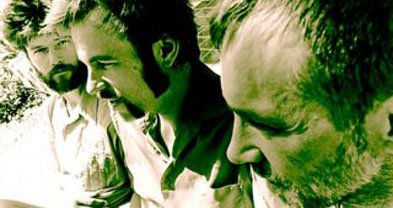 Mystic-pop trio Maquiladora was founded in 1995, with Eric Nielsen (who fronts High Mountain Tempel) and his Buzz or Howl bandmate Bruce McKenzie, along with Phil Beaumont (later to become principal of the Children’s Museum school in Banker’s Hill). The band recorded and performed for around eleven years before taking an extended break.

“Our last Maquiladora show was at the Penguin House in Tokyo in the summer of 2006,” says cofounder Nielsen. “After Japan, we decided to take a break and see where we were.”

The band also toured in 2010, sans Beaumont. Nielsen and McKenzie still occassionally work as Buzz or Howl, and the duo also has a project called Beggars, whose debut 2-CD release came out on the Lotushouse label in early 2013.

In 2015, the band recorded a collaboration album with Tokyo, japan-based band Tenniscoats, Healthy in California, tracked in Ocean Beach and supported with a Japanese tour. "The first time that Maquiladora went to tour Japan in 2003, we were driven to the Tenniscoats house on the outskirts of Tokyo and handed a fanzine that they had created about Maquiladora," says Nielsen. "We also fell in love with their music when we were there and have played numerous shows with them in the four tours Maquiladora has done in Japan."