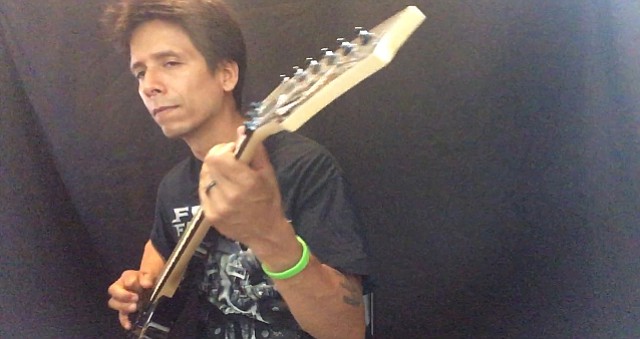 "I’ve lived in San Diego since 1992," says Mando Padilla, who played thrash metal in bands like Yabutifida, Meagan’s Jar, and OHK in the 80s and 90s. "I’m originally from Brawley California. I spent every summer from 1982 up until then visiting my family who are from San Diego. I absorbed the culture and liked the early 80’s Metal lifestyle of San Diego."

Padilla began self-releasing indie collections under his own name in 2001. "I actually quit music in 2000 because a musical direction couldn’t be determined by OHK. From there, I focused on my graphic design studies at Platt College. Between my day classes and evening shift, I started recording songs. It was then that I realized that I’d never stop making music." Subsequent solo releases include Music Posseses, Freak Show Séance, and California Red.

An album called Tripping the Riff was released in March 2018, his first full length featuring him playing guitar on all-instrumental tracks. "The album title came about after writing the instrumental 'Tripping The Riff,' which had so many changes, counter parts, harmonies, and genres within a span of 1:42 minutes. The title was inspired by the animated series Tripping the Rift. The album itself is made up of guitar compositions, which was fun because it allowed me to focus on guitar only. I was inspired by musicians like Yngwie Malmsteen, Andy James, Joe Satriani, and Dave Brubeck."

"The cover art is made up of imagery from the 'Charvel Superheroes' video. The idea behind the cover was to convey that it's a guitar-based collection of music." The first single, “US Fest Metal Day Tribute I & II” consists of two songs marking the 35th anniversary of the US Festival’s Heavy Metal Day, with an ambitious musical collage inspired by the bands on that 1983 bill.