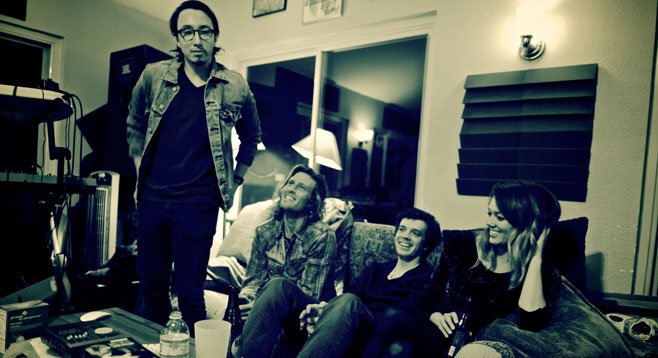 Cameron Wilson (vocals, bass), his sister Michaela Wilson (keys, vocals), Ryan Miller (drums), and Rutger Rosenborg (guitar). All but Michaela previously played together in the punk band Numskull. “All four of us have known each other since childhood,” says Miller. As for the band name, “We found it on a receipt. ‘Ed,’ ‘Ghost,’ and ‘Tucker’ were printed on an old receipt, and we used them.”

Rosenborg explains the new name. "We wanted something that would reflect the sound and aesthetic we were going for, so the word 'lull' and all of its associations made sense: lullabies, rolling rhythms, droning, the space between catharses, etc."

The debut Lulls single "Bruise" was released in summer 2016. "'Bruise' made sense because it is a fairly simple track that we thought could appeal to a wide audience," says Miller. "It's not super long, not very experimental, it has a fairly traditional song structure, and it gives the listener a good overall idea for what we sound like."

They followed up by recording their Island of Daughters full-length, initially released in a vinyl edition. According to Rosenborg, "The album title is actually a line from the third song on the album, 'Calafia,' which is a reference to a Spanish myth that California was founded as an empire of black women by an Amazonian warrior queen. For us, it captured the themes of femininity and geography, which are prominent on the entire album, quite nicely."

The group quickly added keyboardist Max Montana Idas (Cameron Wilson's cousin and bandmate in trip-hop project Kilgore Trout) and produced a pair of MTV-quality promotional videos. "Cameron did the 'Bruise' video with some help from our friend Steven Wahl, and our buddy Matthew Lawless did the 'Paris' video," says Rosenborg. "We definitely strive to keep our visual art as high quality and reflective of our aural art as we can."

By late 2018, the Lulls had reconstituted as an indie pop-rock duo featuring just Rutger Rosenborg and Ryan Miller, who collaborated via long distance from their homes in NYC (Rosenborg, who relocated in order to attend NYU) and LA (Miller). They released an EP called Meridian that October, featuring several songs written in a rented cabin in Idyllwild, in the San Bernardino mountains.

I used to like them before the talented one moved to LA.

I also heard this. Completely AGREE. Gosh, don't it always seem to go? Hope you caught that Counting Crows reference. Hope you like them like I DO.

What's your take on the state of current political affairs, realfan619? Who ya votin' for? Third party I hope?????