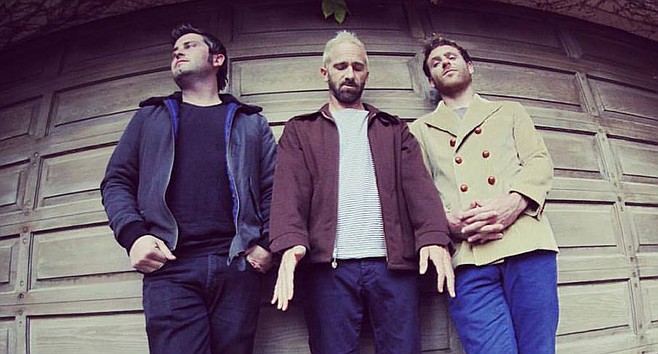 Influences: Bob Dylan, Pink Floyd, Television, the Rolling Stones, the Beatles, the Grateful Dead, the Clash, the Smiths, the Kinks, REM, the Who

David Hyman and Scott Seader formed the Sinclairs in Brooklyn, New York in 2008. At the end of 2013, after hooking up with a San Diego drummer via Craigslist, the Sinclairs drove across the country and played a show the first night they arrived. They ended up liking San Diego so much that they stayed. “We had become a little spent on some of the superficiality and oversaturation of the New York music scene,” says David Hyman.

They band put together their own small recording studio in North County. In 2014, they were invited by Charlotte Muhl, girlfriend and musical partner of Sean Lennon, to record in upstate New York at Yoko Ono's private studio. “We met them through our good friend and musical mentor as well as the producer of our first EP, Dougie Bowne...we also attended Sean and Charlotte’s first show as the Goastt, so I guess our fates are just intertwined in that way. We’ve met Yoko a bunch but have never played with her.”

In 2016, the Sinclairs paired down to just Hyman and Seader. The duo recruited Sean Cox (Bandalier) and renamed themselves the Lucy Ring, later adding drummer Adam Chini, who played with Cox in Social Green.

Hyman told the Reader how the two bands ended up merging. "Cathryn Beeks played the Sinclairs on the Local Hour, and Sean Cox was tuned in because she was also playing his band Bandalier that night. He heard us and immediately got in touch and suggested our bands to do a show together. We played a small gig together, after which Sean told us that he could also play keyboards and wanted to play with us."

"Scott and I really liked him and, when we saw how good a musician he was, playing both guitar and keys and having a great voice, we were pretty blown away. He played maybe three or four gigs with us on keys in the Sinclairs and things just sort of organically began changing."

The new band name references a famous tale from World War 2. "Lucy was the code name used by Rudolph Roessler, who was a German citizen who spied on the Nazis. Still to this day, they don’t know how he did it, but he got Nazi secrets to the Soviets and the Allies and helped turn the war. A very mysterious guy."

Hyman says the Lucy Ring is too unlike their previous bands to keep their previous name. "We thought about bands like the Dead and the Who and Radiohead who went through name changes, so we went for it. It literally took us a month and probably 300 attempts to find a new name. You wouldn’t believe how many band names are already taken."

Their debut self-titled Lucy Ring EP was released in October 2016, promoted with a video for the track "Make It Rain" filmed in La Mission, Baja, Mexico. "My girlfriend, Paulina Jurzec, is a filmmaker and producer," says Hyman. "We had gone horseback riding in Baja for a day and met a great woman named Marty Harriman, who owns a horse ranch in La Mission, not far from the border. On the ride, I mentioned that I was a musician, and she told me I was riding the horse from the Beyonce and Jay-Z video, 'Bonnie and Clyde,' from way back. We had a big laugh about it, and I told her we needed a video for our record...she and Paulina basically then set up the whole thing."

Conceived as a pagan acid western, the video features stunts performed by real Mexican bull riders and vaqueros who put the band through their paces as they had to quickly acclimate to spending all day on horseback. Paying homage to both Jodorowsky’s El Topo and old spaghetti westerns, the video was directed by Tijuana filmmaker Luis Mercado, featuring a brief cameo from Shorty Rossi, the star of the reality TV show Pit Boss.

By 2019, the band had pared back down to a trio featuring Cox, Hyman, and Seader.