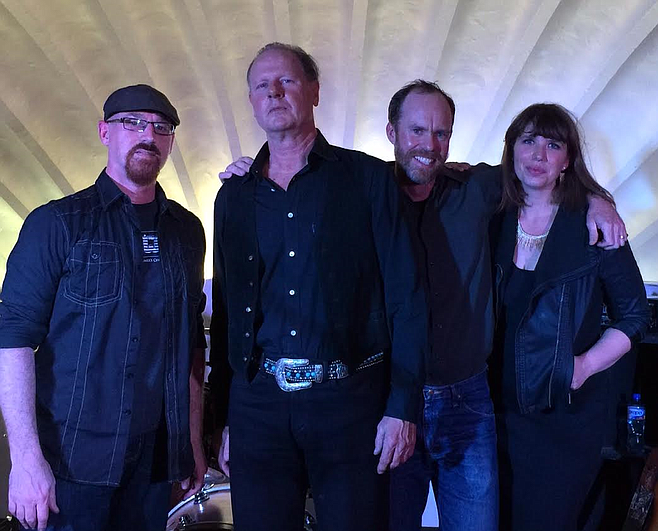 Founded in 2015 and based in Kearny Mesa and Tierrasanta by neighbors Scott Walsh and Amy Day, alt-indie-folk-rockers the Local started with a living room piano that almost got sold, plus a 20 year-old guitar missing three strings. The band is filled out by guitarist and bassist Neal Hedegard (who owns Kearny Mesa's Left Coast Studios) and drummer Ray Daniels.

Their debut album Mission Trails was released in September 2017. "Mission Trails Regional Park is within walking distance of the homes of three of the four members," says Day. "Scott and I individually spend a lot of time in Mission Trails. Spending time outside in such a peaceful and beautiful place is how we clear our heads and think through the ideas that become our songs. The name of our band and the name of the album are all really meant to reflect how much we love San Diego, and how living here brought us all together." The album cover features the Park entrance.

The band played steady gigs, in various configurations. "What you'll notice when you see us live is that you'll often see us playing just as an acoustic duo," says Day, "or with other San Diego musicians we've met along the way like Lance Dieckmann, Ted Stern, and Israel Garcia, and our live performances have a much more acoustic sound than the album does. We love it that our songs have legs and can be reinterpreted."

The band split after Scott Walsh announced plans to move to Africa. Amy Day briefly joined the Peripherals, later forming a band with Omar Musisko of that group, the Spiritual Motels. Their debut album was released in November 2019.

When Walsh ended up moving back to San Diego, he and Amy Day formed a new band called Shepherd Canyon.