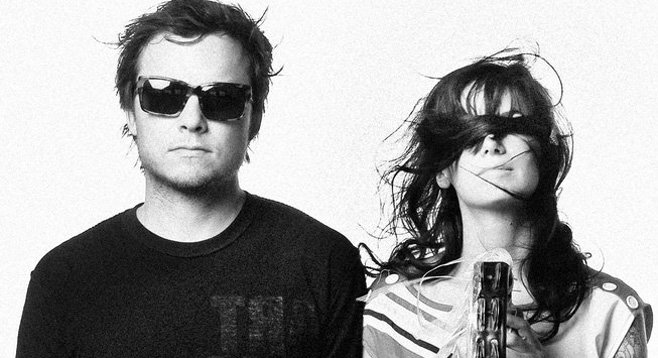 “I don’t think they mean to be so degrading,” says drummer Celeste “CC” Spina of the bluesy, grungy
shoegazing electronica band Little Hurricane, “but I went to buy cymbal polish, and the guy said, ‘Well, what kind of cymbals does he have?’”

The White Stripes comparison is common for the boy-girl blues-rock duo. In August 2009, Chicago-born C.C. (a cook and bartender) got back on drums after eight years away from a set and put an ad on craigslist looking for like-minded musicians. Guitarist Anthony “Tone” Catalano (a former MTV/VH1 audio/video engineer) caught her attention when he mentioned his jazz-band days in high school.

“I’ve been writing songs for years, looking for drummers,” says Tone (who relocated from Santa Cruz to North Park). “I think it’s unique to have a girl drummer.”

“The previous bands I’ve been in were more rock, more produced,” says Tone, who makes custom guitar slides from wine- and whiskey-bottle necks. “Between songs I would play the blues, just jam, and then I’d have to go back to working on the songs. When I met [C.C.], she said she wanted to do a jazz-and-blues thing, and I said, ‘Yeah, I’ll play that, that’d actually be really great.’... The vocals aren’t tuned, not everything is on time, it’s raw, but there’s something very fun about it.”

In summer 2010, Tone was working as a sound engineer at Carlsbad’s Le Mobile studio; he has tuned and recorded acts such as Gwen Stefani, the Red Hot Chili Peppers, and Metallica.

“Lately we’ve been trying to tap into the saddest things possible...loneliness and age...lies...home-wreckers,” he says regarding lyrics. “I love the old blues, but I think there’re things we can bring into it that hopefully progresses the genre into the future.”

As for touring, “Instead of playing in a town and packing up the next morning, we want to stay in towns, meet people, get to know the culture,” Tone says. “We want to learn from people and take our music different places.”

Spina says that some audience members really stand out. “At Lollapalooza in Chicago there was a guy holding a gigantic sign that said 'CC, you kissed me in Encinitas!' It was really funny, and somewhat distracting because the entire set he kept trying to get my attention. I don't think the people behind him were too happy, but it’s something that really made me laugh.”

The group were the first band to record a SoundDiego Session. After winning Best New Artist at the 2010 San Diego Music Awards, they went on a four month national tour.

“In Seattle we got to meet a lot of local bands and see what was going on in that community,” says Tone. “But, gas has become really expensive. Also, we didn’t realize that a lot of venues don’t want you playing again in the same city within a week or two of a show. So that’s caused a little bit of trouble. The slow tour doesn’t make as much sense as we’d hoped. In the future, we’re going to bounce around a bit faster.”

“The first time you go to a city as a new band, it’s really hard to get venues to open up to you,” according to C.C., who also works at True North Tavern. “They’ve never heard your name before. You’re from a different city.... What we enjoyed and really didn’t expect was having a lot of people reach out to us. Before we even got to cities, people were hanging up fliers and making Yelp events. People we didn’t even know were helping us out.”

One Seattle benefactor had seen their online Wilcox Sessions clip produced by a collection of filmmakers who make music videos with touring bands in their Hollywood loft. He contacted the band by email, posted fliers, and refused reimbursement when they met.

The band released a new album Homewrecker in April 2011. After playing an A&R showcase in New York in early May, they signed with a booking agent from the Paradigm agency. At the San Diego Music Awards in August, they took home trophies for Album of the Year (Homewrecker), Best Alternative Album (Homewrecker), and Best Alternative.

A week later, they were at #5 on the iTunes blues charts. Later in 2011, their song “Haunted Heart” was heard on Gossip Girl, and another tune, “Get By,” was heard in the ABC drama Revenge.

After an early 2014 tour with the John Butler Trio, Little Hurricane released their album Gold Fever (Death Valley Records), recorded in Julian in an old apple-packing house built in the 1800s. The house was built from foot-and-a-half thick stone and crammed with thousands of books left behind by its author-owners, offering raw sonic sound alongside their analog equipment. Just like their 2011 debut, the album was produced by frontman Tone Catalano.

"One of the most important things for us on this album was making sure we never strayed too far from just good, straight-up rock-and-roll recording," he says. "We try to keep it raw and honest, and with the two of us that's not hard."

The album release was followed by a tour, running from May 2, 2014 at the State Room in Salt Lake City, UT and continuing through June 7 for a hometown show at downtown's House of Blues. That October, Gold Fever won Album of the Year at the San Diego Music Awards.

The blues duo's fourth studio album Love Luck was released via their own Death Valley Records on August 9, 2019 and supported with a tour that kicked off August 2, hitting the Music Box on October 11. A single and video was released for the track "One Night at a Time."

As of 2019, Anthony Catalano was playing with Love Angeles.