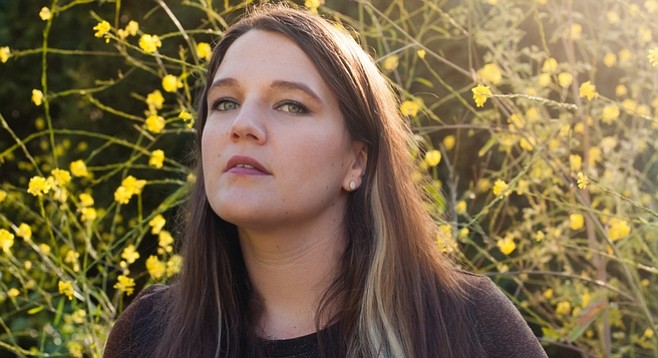 Inspired by artists like Bob Dylan, Fiona Apple, and her gospel-singing grandparents, Lindsay White’s soft-spoken songs fall in the same songstress vein as Jewel and Janis Ian. After moving to San Diego in 2005, the soulful songwriter got her local start playing open mikes around town at venues like Lestat’s Coffee House in Normal Heights. She also met and befriended local promoter Cathryn Beeks, who helped her find footing within the songwriting community.

In October 2010, White released her album Tracks, its name and sound (and cover artwork by Nicole Torres) all inspired by her favorite album, Bob Dylan’s Blood on the Tracks. The record was produced in San Diego by Alexander Dausch of Studio Studios, receiving notable press from nationally distributed LGBT Curve Magazine, which claimed "The bittersweet, sincere vocals of Lindsay White make her sound like the lovechild of Hope Sandoval and Regina Spektor - and we love it."

Around this time, White joined forces with local songwriter and then-girlfriend Veronica May to focus on a pop folk duo called the Lovebirds. They toured nationally and released three full-lengths: Nutsy Pants (2012), And a One And a Two (2013), and Breakup Shmakeup (2014). All three albums (produced in San Diego by Jeff Berkley at Berkley Sound) received San Diego Music Award nominations for Best Local Recording, as the Lovebirds became a fixture throughout the national folk songwriting community, performing official showcases at conferences such as FAR West, SWRFA, and Folk Alliance International. They also opened for acts including Steve Poltz, Bushwalla, Shook Twins, The Lone Bellow, and David Crosby.

In 2014, The Lovebirds were selected as finalists in Kerrville Folk Festival’s New Folk songwriting competition based on their songs “Boat Train” and “Crimson Love” (both penned by White). The duo went on to win the competition, sharing honors with acclaimed songwriters including Matt Nakoa, Connor Garvey, C Daniel Boling, Caroline Spence, and Frank Martin Gilligan. “Boat Train” also received an exclusive premiere on GuitarWorld.com. Other press included interviews in Curve Magazine, a mention on Advocate.com’s “Hot List,” and cover features for both LGBT Weekly and San Diego Troubadour.

White's summer 2017 album Lights Out, her first solo full-length after the Lovebirds disbanded the previous year, was promoted with a solo west coast tour through August, as well as being featured on dates with her band the White Lies. "I also want to get right back into the studio to work on my next concept," she told the Reader, "a collection of literature-inspired songs. I’m a member of a local songwriting book club, and I’ve written songs influenced by horror fiction, psychology non-fiction, artist memoirs, self-help books, and even major best-sellers like The Alchemist. I like the idea of art inspired by art."

"I also want to get right back into the studio to work on my next concept," she told the Reader, "a collection of literature-inspired songs. I’m a member of a local songwriting book club, and I’ve written songs influenced by horror fiction, psychology non-fiction, artist memoirs, self-help books, and even major best-sellers like The Alchemist. I like the idea of art inspired by art."

White won Best Singer Songwriter at the 2018 San Diego Music Awards. Her December 2018 single "The Hound," recorded with longtime producer Alexander Dausch of Studio Studios, was inspired by a Game of Thrones-themed songwriting challenge and based on the character Sandor Clegane. “Nearly everything off-putting about this character stems from the childhood trauma of his older brother burning his face just for fun. That one experience drives his survivalist mentality. Slowly though, the resilience he initially uses to shut others out eventually becomes the catalyst that allows him to let love in. My hope is that people, GOT fans or not, can think about how trauma is at work in their own lives. Sometimes our need to put up walls is at odds with our desire to love, be loved, and do good. We fight these battles hourly. Sometimes we triumph valiantly, sometimes we fail miserably, but the salvation lives in the resilience and our journey toward it. When we push through all that pain to gain perspective, self-love, and empathy for others, that's where the gold is.”

At the end of May 2019, White reported "I'm dropping a new single on June 6 called 'Let Love Lead the Way,' which I wrote and performed for this year's Women's March San Diego...if you know a journalist who wants to write about, premiere the single/video, or interview me about why women still have to sing protest songs about basic human rights in 2019, I'll just be over here taking some deep breaths, chewing on a Xanax, and trying to get my sh*t together."

Her late 2019 single "The Funeral" pays tribute to the late Jeffrey Joe Morin, who mentored her and many other local musicians before he died from complications of respiratory failure in July 2017. Inspired by The Magic Strings of Frankie Presto by Mitch Albom (a San Diego Songwriters Book Club selection), the video features a slideshow of messages sent from Morin to White through the years.