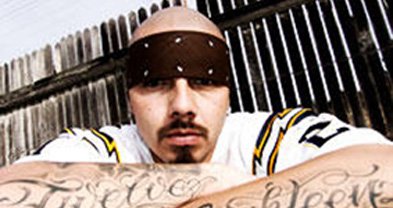 Lil Rob (aka Ese 1218, real name Roberto Flores, born September 1975) is a Mexican-American (Chicano) rap artist from San Diego, California. He was born and raised in the La Colonia area of Eden Gardens, a Hispanic neighborhood near Solana Beach.

Lil Rob debuted as an artist in 1992. Prior to the release of his album Twelve Eighteen Part 1, he regularly moved as many as 100,000 units for each independent CD he recorded. The number 1218, which is tattooed on Lil Rob's arms, represents the numeric value of the letters L and R, respectively, which are Lil Rob's initials. The number was used by Lil Rob during his days as a graffiti tagger.

In 1994, at the age of 18, Lil Rob's chin was shattered when he was shot in the jaw. Over time Lil Rob renounced his gang affiliations and called for "Brown Pride" and unity between all Chicanos.

Lil Rob has found commercial success with Twelve Eighteen Part 1, which had been in regular rotation on radio stations outside of the West Coast thanks to the singles "Summer Nights" and "Bring Out the Freak in You." Lil Rob's newest single is "Do It," and he is working on his next album, Twelve Eighteen, Part 2. Lil Rob also had a song on the mixtape Top Doggs.

Rumors surfaced in late March 2010 that Lil Rob had died.