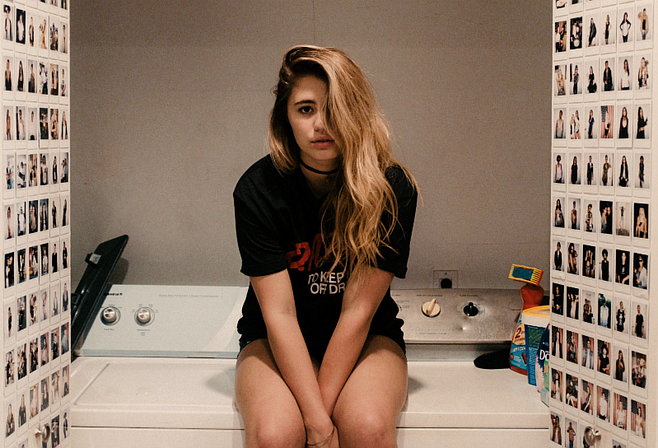 Lia Marie Johnson first earned local notice with ‘tween pop stars Pink Army, which she co-founded with Alicia Randolph (aka Tina) and Kayla Cruise (aka Charisma Kain). "I was born in San Diego, but moved [to Wahiawa, Hawaii] when I was about 6 months old," says Johnson. "My dad is in the Navy, so we lived in Florida, Port Hueneme and Virginia Beach before moving to San Diego."

The group is modeled after Disney Channel/Nickelodeon stars such as Miley Cyrus and Selena Gomez. In March 2010, they received Child Actor Recognition Awards at Universal Studios. The next day, Pink Army marched into Sonikwire Studios in Irvine to record the first track on their debut album, with L.A.-based producer and cowriter Eddie Galan (B5, the Clique Girlz, Akon, Backstreet Boys, Alyson Stoner, etc.). In early 2011, Johnson was replaced in the band by Maddie Simpson, who was replaced by 13 year-old Lauren Taylor, though Johnson rejoined Pink Army in summer 2012.

Johnson and teen singer Roxy King teamed up with their dog-surfer friend Ricochet, along with other surfing and skateboarding San Diego dogs, to make a music video for the song “San Diego Dogs,” to spread their message: “Adopt Your Dog from a Rescue or Shelter!”

Recorded and mixed at San Diego’s Capricorn Studios, with lyrics by Johnson, King, and Tony Perri, proceeds from the iTunes release of “San Diego Dogs” are donated to the American Humane Association and the Helen Woodward Animal Center. The video’s surfing star Ricochet the dog has raised over $125,000 for human and animal causes. She also surfs tandem with special needs kids and people with disabilities for therapeutic purposes.

Johnson starred in the popular webseries Kids React. "Kids React is a web series by the Fine Brothers," she explains. "Basically, we watch viral videos and provide our opinion/comments. I moved to Teens React this year when I started high school. Teens React is similar, but some of the videos or topics are more teen-centric."

Johnson has also appeared on TV programs like the Tim and Eric Awesome Show, the Unit, and When Weather Changed History. "I'm focused on acting. I'm currently with CESD and Monster Talent and have been busy studying and auditioning."

She teamed up with El Cajon filmmaker Brent Bokovoy to make a short comedic horror film called Monster in my Swimming Pool, which won at the 2011 Universal Studios Eyegore Award.

"I met Brent Bokovoy through a casting notice...my younger sister Sammie was the lead in the film. Brent submited the film to the Universal Studios Eyegore Awards contest. When it made it to the top ten films, I made a YouTube video that received over 300,000 views. I have some great fans that voted for the movie and we were so lucky it won! I got to attend the Eyegore Awards with Brent -- and my mom -- and met some awesome people. They played the movie on the big screen at Universal Studios. It was shot in two weekends. I think it turned out great!"

On April 14, 2012, she played an acoustic set for the Young Performers Showcase at the House of Blues downtown. In 2015, the 19-year-old was named one of the Top 100 YouTubers in the world, boasting an actively engaged 1.6 million Instagram followers.

As an actress, she starred in AwesomenessTV/Dreamworks Animation film Expelled opposite Cameron Dallas, and had the lead in the film Terry the Tomboy, which debuted on Nickelodeon, as well as starring in American Wrestler: The Wizard with Jon Voight, the TV series [email protected], and the young adult YouTube thriller The Thinning.

In 2016, Johnson signed to Capitol Records and released her debut single that October, "DNA," co-written with producer Howard Benson, co-producer Lenny Skolnik, and Sidnie Tipton. A deeply personal song about her father's battle with alcoholism, she says "I was at a really hard place in my life when I wrote 'DNA.' It was my first time working with Lenny and Sidnie and, as we got to know each other, they started asking about my life. When they asked about my family, I started getting really emotional and at the end of explaining my life story I said 'but I guess you can't stop DNA.' We all looked at each other and everything clicked. We got so excited and started writing immediately."

The following month, her online interview with President Obama helped bump the "DNA" single up to over a million streams.