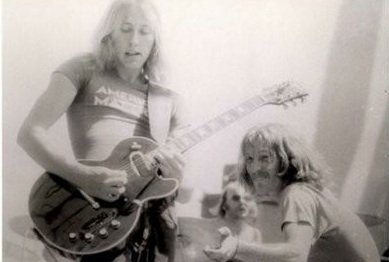 There’s a basketball hoop in many of Leroy Zeke’s photos and for good reason: school gymnasiums were their first arenas. A San Diego band based out of Lemon Grove, they were active from 1969 to the mid-1970s. Teens themselves, LZ were the top of a stack of seriously gifted local high school bands that included Emergency Exit and Glory, Horse Feathers, Trust, and Sparky Hustle and the Pie.

Leroy Zeke was first among them to attract label attention, and they were one of the first local bands to have their stuff played on the radio. Their ascension from back yard keggers and block parties and high school dances to Balboa Stadium and the Greek amphitheater at SDSU and Starlight Bowl came after they'd gained the attention of a promoter named Bill Wright at American Entertainment West. He in turn heard about them from the late night deejay on KDEO radio on Fletcher Parkway at the crest of El Cajon.

The deejay’s name was George Manning, and he idolized Leroy Zeke.

“He was the first deejay to play our stuff on the radio. We were still in high school,” says Thom Landt, who went to Crawford and played guitar. “We were just kids.”

“I'll never forget it,” says Michael Botte, LZ’s bassist. “It was a thrill, hearing our record on the radio. Wow! San Diego’s own Leroy Zeke.”

Drummer Bob Bowley (aka Bobby Whiteshoes, of Excess Baggage, Pete Pearson, Big Nick & The Gila Monsters, and others) said that most of their early gigs can only be described as spontaneous. “People would call us on a Saturday morning, and by the afternoon we’d be playing. We were kids with nothing else to do.”

They played homecoming dances and senior proms at every high school and parochial school in lower San Diego it seems, with the exception of Landt’s own high school. “We never did play any shows at Crawford,” he says with a look of revelation. “But we played that place, AMSD, the church where they have those concerts now? But back when that place was still just a church.”

But that was long ago. Leroy Zeke haven’t performed in decades. There is no retrospective album scheduled for release nor are there plans for any reunion shows; after all, Mark Ferguson fell ill. And without Fergie, who was in his day an astonishing front man, a singer with a cowbell who could do onstage backflips and summersaults and never miss a beat, the group decision was to retire Leroy Zeke.

It was in fact the 2012 posting of a Facebook page that brought back a flood of nostalgia: what ever happened to those guys?

Soon after, on a rainy Saturday afternoon, the founding members are all gathered in what once served as their practice room and headquarters some 30-odd years ago. It is essentially an unfinished basement under the floorboards of the Lemon Grove house that Bob Goodman grew up in.

“We used to change the light bulbs in here sometimes.” Thom Landt, who in his late 50s clearly resembles his old high school self says the band would go all blue bulbs sometimes, other times red.

The members sit in a circle and trade memories and crack wise and smoke. A flask makes it around once or twice. One unoccupied seat remains: it is an empty beer keg with a pillow for a cushion.

“We wondered,” says Michael Botte, “who was gonna end up with that one.”

Some of band’s original cabinets and amplifiers, all big-wattage stuff from the old school are still in here as if enshrined. Seeing them, one recalls a fact about Leroy Zeke: as a band, they were louder than anyone which only added to their cool factor.

“In those days,” says Botte, “you couldn’t put enough amps on stage.”

The giant twin air raid horns that sat mounted high atop poles and doubled as PA speakers at every Zeke ear-blast are now piled in a dark and cobwebbed corner of the studio.

“Remember the Brain Police? We bought these horns from them,” Bob Goodman says.

In a corner gathering dust rests Goodman’s Hammond church organ. C-3s are by design too big to move, but LZ moved it anyway. The punch of the organ’s Leslie gave the band a full and bluesy richness that their contemporaries lacked. Somehow, the band muscled the Hammond out through the little practice room door, down some shattered concrete steps, and out onto the driveway to their tour bus: a reclaimed U.S. postal service van.

“I’ve had two discs removed,” Goodman says about the present condition of his spine.

Leroy Zeke, as it turns out, is not the name of an actual person. Nor was it a band nod to Pink Floyd or Jethro Tull or Lynyrd Skynyrd. Goodman explains that “We were trying to find all kinds of deep meaning names. We used Led Zeppelin’s initials, and we were trying to make up with something heavy and mysterious, but we weren’t getting anywhere. Fergie finally said hell, why don’t you just call it Leroy Zeke?”

“Before that,” says Mark Ferguson, “we used different names at every show we played.”

“We placed first in a battle of the bands at Grossmont College as Leroy Zeke,” says Goodman, “and we placed sixth as Farouk University.”

“They don’t make these any more,” he says of the white patent leathers for which he is named. “You have to rent a tux that comes with white shoes and not return them.”

By Autumn 1975, Leroy Zeke was playing San Diego State dances, as well as Park Place Lounge on Monday and Tuesday evenings. They would also open for Paul Butterfield, Tower of Power, the Doobie Brothers, and more. LZ were comfortable on the arena stage. They were a high energy boogie band with a psychedelic rock flair that was heavy on the blues guitar. Landt was always in the pocket, tasteful and articulate as a guitarist, but never ornate.

“Anything with more than three chords,” he says, “borders on jazz.”

LZ caught the ear of a Hollywood record producer named Peter Starr (surely not his real name) whose claim to fame was that he was acting as Tim Weisberg's producer at the time. Starr took them to A&M Records in Los Angeles to cut a demo. The session was an epic failure. “We couldn’t get a rhythm track down,” says Landt. He thinks the band was likely chemically altered as per their usual, and that the production cues between Starr and the A&M engineer were conflicted.

“Then, after that, we played the Troubadour.”

Landt: “And we partied. We were the local Rolling Stones.”

Even in high school?

“Oh yeah,” Landt says, with added emphasis on the word yeah. He says that’s really why LZ faded. “My belief is that the partying was overtaking the band.”

“If Leroy Zeke hadn’t ended when it did,” Bowley reflects, “I might have ended up being a casualty.”

Most of the members remained active in music. Bob Bowley worked for Fender in Arizona and performed there with Big Nick and the Gila Monsters before returning to San Diego to play with Blitz Brother Barney Roach. Landt and Botte have recorded and toured with Paul Cotton, formerly of Poco. Landt released a solo album called Bordertown in 2008.

Bowley passed away in March 2017, due to injuries sustained from working underneath a car when the jack collapsed.