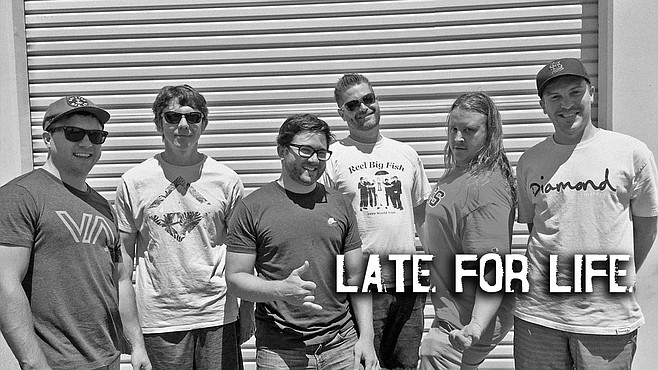 Late For Life originally formed in Miami, FL as Switzer circa 2001, when the members met during college. They played over 100 shows in 2003, selling out clubs on the east coast and making an appearance on the Van’s Warped Tour, becoming known for offbeat covers like Depeche Mode's "Enjoy the Silence" and Slayer's "Raining Blood." Despite the moderate success, they went on hiatus in 2004 and would not make a return for 13 years.

After trombonist Neil relocated to San Diego from the east coast, a collection of songs written between 2010-2016 was tracked in the spare bedroom at Neil’s house, A Last Waltz for Miami, released in 2017 and featuring original members Dicky (sax) and Drew (guitar, vocals).

As of 2019, the six-piece band still featured the three founders, along with three new members including a second guitarist (not featured in the original lineup).