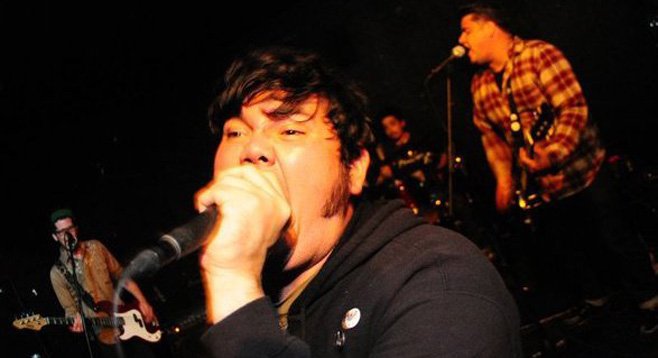 Influences: The Ramones, the Sex Pistols, Braaiins, the Clash, the Sess, the Powerchords, the Saints, Johnny Thunders, the Spits

“I joined the band to become a bartender,” says singer John “Moon Boots” Thompson of ’77-style punk band the Last Years. “I think that’s how it works.”

Moon Boots once tended his dream bar, Tower, for a scene in a student film. “The only part of me that made it in the film was my arm,” Moon Boots laughs between swills of Bohemia at Live Wire. Named after a song by Stiv Bators of the Dead Boys, the Last Years formed in February 2010, debuting at one of Radio Room’s last shows and going on to play Tower, Eleven, Soda, Beauty, Shakedown, and the Ken Club.

“All these guys have never been in real bands,” guitarist Steve Baeza gibes.

Most of the Years admit to little history beyond “shitty high school bands,” but their aspirations are modest, if not forthright.

“I just needed something to do between beers,” bassist Fudge half jokes.

“My whole purpose was to get free beer at the bars,” Steve says. “Also, we weren’t hearing the music we wanted to hear.” He cites Braaiins, the Sess, and the Powerchords as local forerunners to their sound, with influence from the Saints, Johnny Thunders, and the Spits.

“No matter what music bands play, they’ll always go home and put on a Ramones record,” Steve says. “We just want people to admit that.”

Fudge says the Years’ lyrical themes include chopping people up, being an assassin, and riding bikes.