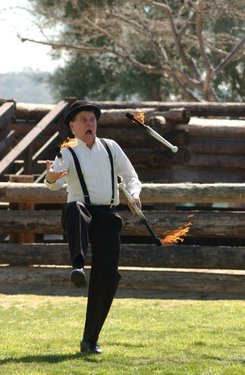 “I don’t know of any other mimes that have written songs, unless you consider Charlie Chaplin, who did write and record music for his movies,” says singer/songwriter Larry Keough. Having spent over a decade as a mime performer in Horton Plaza, Seaport Village, and elsewhere, Keough has also played characters at local tourist spots like the Wild Animal Park, where he spent several years as Captain Cameroon.

Now, he says, “I’m writing children’s books which include CDs of songs that I’ve written. My first book Fragilly was published in 2007, with a follow-up called Dirty Dan in 2009.” The latter title was adapted as a stage play that has toured through San Diego elementary schools, where he counts the majority of his fan base.

“I currently teach kids to play guitar and write songs at the Explorer Elementary Charter School in Point Loma. At the end of the year, the kids get a CD of a song that we produce together. I have them sing their song that I record on a four-track digital system, then I bring it home and dump it into my Pro Tools system. This year will be our eighth CD being produced at Explorer School.”

Songs on Keough’s book CDs include “Crabby Land,” “Sam The Waltzing Bear,” “Ride to the Stars,” “What’s in the Box,” and “The Fair,” concerning the annual Del Mar event where he’s performed for over two decades.

“I play guitar and use a midi to enhance some songs, but I’ve also used live players like Paul Castellanos [violin and mandolin], Larry Lowry [bass], Jim Lair [piano], and singer Jeanne Reith, who sings with Raggle Taggle here in San Diego.”

Keough’s third musical book Eddie and Betsy was published in August 2011 on the ReadSing Label. “It’s about two itsy bitsy spiders, with eight songs I wrote for the CD” say the longtime El Cajon resident whose home recording studio is in the Sunny Slopes neighborhood near Fletcher Hills.

A member of the Society of Children’s Book Writers and illustrators (SCBWI), Keough turned 60 in 2011. “I don’t feel that old. Something about working with kids makes you feel younger than your years.”

“I guess I never got around to growing up myself.”