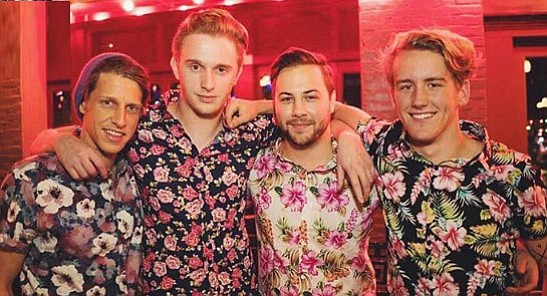 Influences: Arctic Monkeys, the 1975, Catfish and the Bottlemen, Blink 182

Based in Pacific Beach, indie-alternative group Lad’s Holiday was formed in late 2015 when founding members Liam Wilkes (a native of Manchester, England) and Cody Seeger met via Craigslist. “We were both playing in another band that we had found on Craigslist,” says Seeger. “We didn’t have much of a say from a creative aspect, and that band was heading in a different direction musically than we wanted to go.”

"The first show we ever played as Lad’s Holiday, our drummer couldn’t play the show, our bassist had to play drums, and our lead guitarist had to play bass. Not ideal, considering we could only play half of our set. It is pretty comical looking back on it, and quite funny that we were ever able to book a show after that horrific debut."

Their 2016 six-song release The EP was recorded with Skyler Lutes at his Sunset Cliffs based studio, with Lutes eventually joining the band, along with drummer Jack McCain. With onstage banter inspired by Blink 182, the group performed at the Music Box, House of Blues, Soma, 710 Beach Club, Tin Roof, and elsewhere.

They later changed their name to the Frets, billing itself as based in both San Diego and Manchester, England.