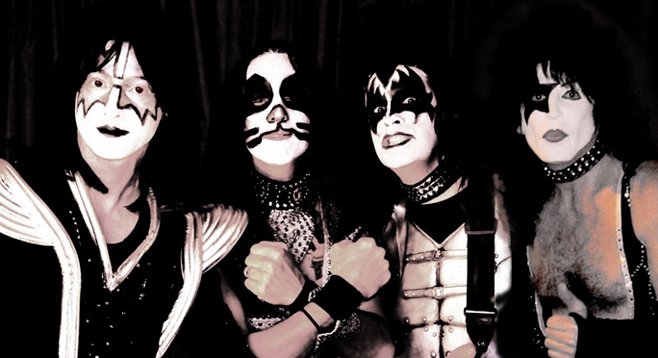 “I remember being six years old and putting the pillows in a semicircle around the couch like a stage. I would air drum with chop sticks to [live album] Kiss Alive. My older brother was really into Kiss.”

Since then, Beckwith has sung and played drums in several bands, including Loss of Control (for 12 years) and various tribute acts emulating Van Halen, Jimi Hendrix, Black Sabbath, and the Black Crowes.

Now Beckwith’s immersed in his role of “Catman,” the character of original Kiss drummer Peter Criss. He says the tribute racket has its drawbacks. “You really have to be a fan of the band, otherwise you can get tired of it really quick. And people can get really picky over the details.”

But doesn’t the original Kiss ever get upset over the use of their intellectual property? “I heard that as long as you don’t make too much money, as long as you fly under the radar, they are cool with it.”

Isn’t Gene Simmons one of the most detested figures in rock? “I have no comment. I respect his business skills. I never met Gene, but I like his music.”