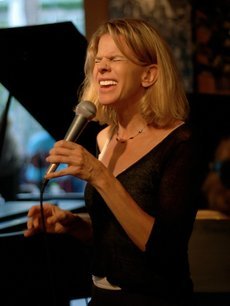 Kevyn Lettau grew up in Berlin, Germany, moving to San Diego when she was 14. By age 17 she’d caught the singing bug and began working with guitarist Peter Sprague singing jazz, R&B and Brazilian music around town, most often with Sprague’s Dance of the Universe Orchestra (which frequently played at Elario’s, on the top floor of the Hotel La Jolla).

The band’s unique blend of Brazilian music, straight-ahead jazz, and covers of tunes by Chick Corea and Weather Report made them somewhat of a local jazz phenomenon. They released several self-produced records including You Make Me Want To Sing, and The Space Between Two Thoughts.

Lettau got her big break in 1984 when the legendary Brazilian pianist and bandleader, Sergio Mendes, discovered her (Al Jarreau was a mentor, too). She toured and recorded with Mendez’ Brazil 99 for eight years, developing her own vocal style along the way.

In the 1990s, she formed the trio BrasilJazz with Peter Sprague and LA drummer/producer Michael Shapiro. After launching her first two solo releases, Kevyn Lettau and BrazilJazz, she signed with the noted JVC Jazz record label in 1992.

Lettau continued her journey of musical and personal exploration with Simple Life, Another Season, Universal Language, and The Language of Flowers. With her next label, Universal Music, she recorded Police, (her exploration of the music from the pop/rock genre-bending group), Little Things, and The Color of Love.

These works led to critical acclaim and a loyal following both in the U.S. and abroad, particularly in Japan and the Philippines, where she achieved near-superstar status (Lettau was a spokesmodel for a soft drink company, featured in multiple television commercials and print ads which ran for years).

Lettau got married and moved to Los Angeles with her husband, musician Michael Shapiro for more than 20 years. While there, she developed the vocal curriculum for the LA Music Academy, and taught at the Musician's Institute, in addition to recording and performing regularly.

After a divorce, Lettau moved back to San Diego in summer, 2009, settling in Ocean Beach. Reuniting with Peter Sprague, she recorded a new full-length, What Is Enough (2008), released on Sprague’s SBE records.

In October 2011, Lettau released Drawn To You (2011), featuring pop-jazz superstar Russell Ferrante of the fusion group the Yellowjackets on keyboards, Mike Miller on guitar, Scott Mayo on saxophone, Glen Fischer on bass, and Matt Starr on drums.

Lettau co-wrote the core of the album with Ferrante a few years previous, but didn’t have the opportunity to record them until 2011. The disc features a mix of mostly contemporary jazz with one Brazilian-flavored tune and a slow cover of “I Want To Hold Your Hand” by the Beatles.