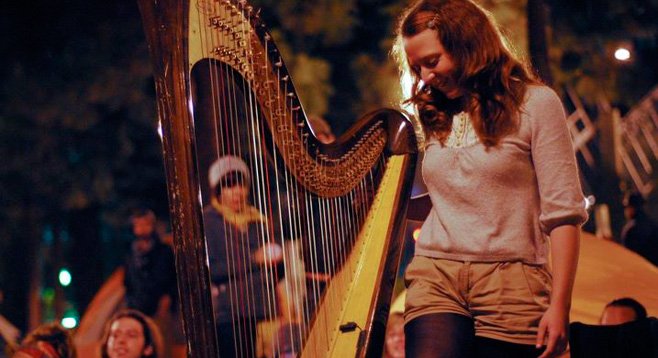 RIYL: The Wrong Trousers, Joni Mitchell, They Might Be Giants, Nickel Creek, Timbuk 3

“When the Wrong Trousers played at the FM 94/9 Independence Jam, it was so thrilling to be a part of a festival. I pretended it was Coachella, which it is my ultimate goal to play, and the crowd was extremely supportive. They even had us sign things and take pictures after, and our stuff was at the merch booth. A real live merch booth!”

After that band’s indefinite hiatus, she decided to venture out on her own. Little plays the concert harp, among whatever other instruments are captivating her at the time. “I love the expressions on sound guy’s faces. Most of them have never miked a harp before.”

Little owns one of those big and grand harps, but travels with a smaller instrument made by Scaldi. “In the harp world, there are two main manufacturers. Lyons and Healy, which are elegant classical harps, and Scaldi, which are more sleek and modern.” Little explains that that hers is a smaller 40-string model. Standard is 47. “It’s more appropriate for me. It’s portable, for one thing. Right now, my harp is in the equipment trailer we’re towing behind the SUV.” She says it has a name: Neil. The harp, not the SUV.

"I've had my harp for almost 10 years or so, and its pretty beat up. It looks like a rock and roll instrument." A classical instrument, yes, but minus the classical aspect. "I can make it sound gritty if I have to."

She points out that the harp isn't a mere gimmick. "I've been a harpist since I was eight years old. I feel that if a stranger saw the band, they might find it gimmicky. But it's my instrument. I didn't just pick it up."

Her songs are at once cutesy and thought-provoking. She enjoys performance for the opportunity to share her views and inspirations with the world.

Asked what cover song is hardest to play on the harp, she says “Anything with a lot of key changes. With the pedal harp, you make your sharps and flats by moving one through seven of the foot pedals up or down. So, say I was covering ‘Bohemian Rhapsody,’ which I’ve been working on, my feet are working more than my hands.”

In early 2011, Little announced “I got signed by a label...Look for my first professionally recorded solo album in summer of 2011.” The label, Aural Gravy Records, released her debut album Personal Myth on CD and via digital download in December 2011.

“The album title [Personal Myth] is basically a term I’ve coined for the way I experience the world, a projection of a persona, befitting for different times and places. But, after awhile, I lose sight of where my real self begins and the fabricated one ends, so in a sense I become mythic to myself. Personal myth.”