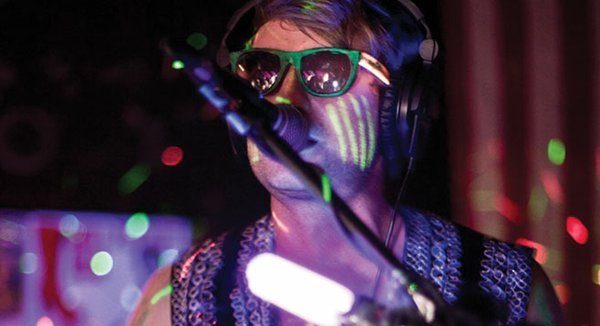 RIYL: Vision of a Dying World

Influences: The Strokes, Vision of a Dying World, Animal Charm

Keith Milgaten has been producing hip-hop records since he was 17. The self-confessed vitamin C addict cofounded Vision of a Dying World with his brother Jackson while the two were growing up in Las Vegas. After the duo moved to San Diego in 2006 and hooked up with local players, they began writing theatrical, ambitious songs, mixing elaborate harmonies with prog-rock guitar, jazz-inspired sax work, and the occasional ukulele solo, earning a nod from Filter magazine as Undiscovered Band of the Month in December 2007.

When Jackson shifted focus to Cuckoo Chaos, Milgaten (who DJs as Keith Sweaty) turned up the heat as Jamuel Saxon, a solo electronic project that has evolved into a full touring and recording ensemble. Keith was nominated for Best Electronic at the 2009 San Diego Music Awards. His ten-song album Landmines & Chandeliers was released in June 2010.

It was a challenging year, as demonstrated by what he describes as his “biggest regret, going to South by Southwest with Black Mamba in 2010. Aimee [Sanchez] and I were not getting along at all by that point, and I basically had a breakdown by the end of it. I also blew most of my Album Leaf remix dough from Sub Pop Records on that trip, with nothing to show for it other than a week-long hangover and a sore throat from the yelling bouts.”

Also made available was a new EP (CD and digital download) featuring songs that didn’t make Pre-Madonna, including a club version of the Vision of a Dying World tune “Awoken by a Scene From the End Times” and a Cuckoo Chaos cover.

As of 2012, Milgaten was living in South Park. “Plenty of parking but far from the freeways.” Early that year, he recorded, mixed, and mastered an EP called Meant To Be, by San Diego band Future You. Then, he announced plans to relocate to NYC in early 2013, though he’ll still tour with his San Diego bandmates as well as developing his solo Keith Sweaty projects.

His alter ego DJ Keith Sweaty released a new full-length called Spaceface in early 2013, around the same time that he announced the end of Jamuel Saxon. The group did regroup in March 2014 for a local show while Milgaten was visiting San Diego.