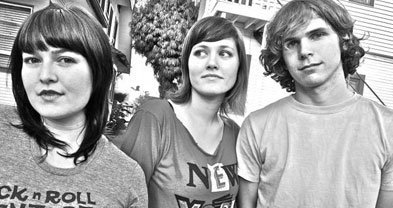 Not long after the March 2009 breakup of Wild Weekend, guitarist Kelly Alvarez and bassist Cara Bowman recruited drummer Mikey Peterson and got started on their new band, the Ramones-influenced garage-rock band Jungle Fever.

Since forming, the trio has been writing material and playing shows. Looking to find outlets for their music, in August 2010, Alvarez, Bowman, and Peterson sent 40 demos with handwritten notes to indie record labels.

“I scoured the internet trying to find labels that I thought we would mesh with,” says Alvarez. “Some labels I had heard of...some I’d never heard of.”

A month later, the band received two responses — one from Windian Records out of Washington D.C., and the other from Surfin’Ki Records, based out of Pisa, Italy. In their letters, both labels informed the band that they wanted to release a Jungle Fever 7-inch.

“When you don’t have internet buzz surrounding your band,” Alvarez, says, “it’s really hard to get your name out there, and I was happy that these guys decided to give us a chance without knowing who the hell we were.”

The records were released within weeks of each other. Windian Record released their 7-inch Cryin’ Blood in November 2010, while the California 7-inch was released by Surfin’Ki around a month later.

For Jungle Fever, having two labels doesn’t create any conflicts. “[We] would rather have several different record labels put out 7-inches rather than one record label put out one full-length LP, mainly because a band can get a little more exposure when several record labels are involved.”