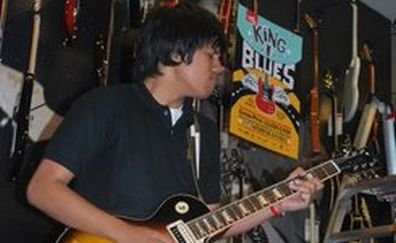 In June 2011, two guitarists from San Diego advanced to the district finals in the nationwide King of the Blues competition sponsored by Guitar Center. Of them, then-17 year-old Joshua Vasquez of Chula Vista, eliminated Scripps Ranch shredder T and a handful of others to win district honors. “It basically means I’m the representative for Southern California,” says Vasquez.

Vasquez has played guitar for less than five years and says this is the first contest he’s ever entered. “I just wanted to try it out.” When asked how much practice time he puts in every day, he says, “It’ll span from an hour to a lot more than that.” His mom says she sometimes hears him playing at three in the morning.

Are young axemasters rediscovering the blues? “I started playing when I was in sixth grade, and at the time I was learning stuff that was popular to my generation, like Green Day,” says Vasquez. “I got bored really, really fast.” He dug deeper and came up with Jimmy Page. “It took me a while to master ‘Stairway to Heaven.’” Then, he ferreted out American roots artists like Chuck Berry. “The blues, you know, is where rock and roll started.”

Texas blues master named Kirby Kelly (he opened for Eric Clapton at Crossroads last year) was named King of the Blues in 2009.