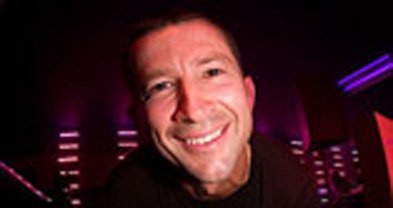 DJ and recording artist Jon Bishop has been at the forefront of the Southern California techno scene since 1991. His radio show Sounds of the Underground on 92.5 FM was one of the first electronica/techno music programs to air. In 1992 he cofounded Club Hedonism at Rich’s in Hillcrest, an event that ran weekly for over a decade, sometimes drawing upwards of 1000 patrons and earning press in Playboy and Details magazines.

Bishop has worked on a dozen albums as a producer and recording artist but always returns to hands-on DJing at area events. These days he’s using CDs more than vinyl.

“With less vinyl coming out every month,” he says, “downloads have become the norm for DJs finding their music. My sets have gone completely digital, with all my tracks on CDs now. Not my choice, but for ease of getting new music and the cost, not to mention lugging those heavy bags of vinyl through airports, you can’t beat downloading music. I love spinning vinyl, and I think people like seeing that, too, but it’s become very costly and a slow way to get music out to the public.”

Bishop is not in love with computer setups nor a fan of programs like Serato, which claim to replicate the vinyl experience. “[It’s fine] until it crashes in the middle of your set, like I’ve seen happen with a few DJs. Nice concept, but you’re screwed if your computer messes up. I’ll play CDs, thank you.”