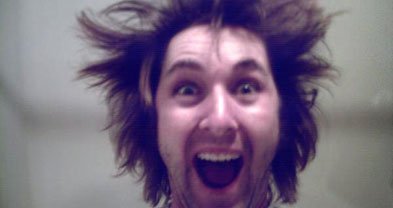 Punk band John Wayne Gacy Daycare was formed in 2009 by Wally (former Wastrels guitarist) and drummer Beebo (Screamin’ Yeehaws). After enlisting singer Davit Buck of the Homeless Sexuals, they played their first gig that summer at the Soda Bar.

“It seems like we don’t fit in with what’s going on in San Diego and everyone hates us,” says Buck. “Maybe it’s our name,” he says, referring to the pedophile serial killer who spawned the band’s handle.

His fellow band members also occasionally go mental over the music. “When I first started using my loop station, playing my vocals backwards and layering in screams and weird sounds, our guitarist got sick and almost passed out. He put his guitar down and went and threw up. When I started playing my coyote distress call at one show, the drummer almost passed out. Even at practice, the dogs outside go nuts.

“It’s definitely a disturbing sound we’re forming, but we’re not trying to piss everyone off. We really want people to understand what we’re doing. Last show we played at Radio Room, the room cleared out. Wasn’t a lot of people to begin with, but those who watched us didn’t stick around.

Buck says he doesn’t mind antagonizing audiences. “I performed in San Francisco in pink little girl's underwear and white stripper gloves,” says Buck, “and a guy called me a fag and wanted to fight me. It made me laugh to be called a fag in San Francisco.... Yeah, I perform in diapers and pajamas and do things that the average person might consider gay, but if you’re not a fag, then seeing the Homeless Sexuals play at a gay bar in Hillcrest ain’t gonna change you one bit. And, if it does, then you should thank us for setting you free.”

As of March 2010, it appears the band has split, with guitarist Wally moving back to Texas. Buck went on to form Zillion Happy Volts, which debuted in December 2010.