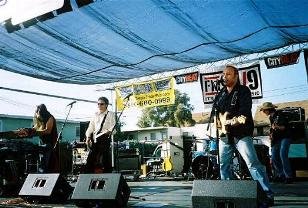 RIYL: The Beat Farmers, the Paladins

In January 1985, Joey joined the Beat Farmers, perpetually touring the United States and Canada, and visiting England, Germany and the Scandinavian countries. Harris wrote, sang and played on five Beat Farmer LPs released by Curb Records, and indie label, Sector 2. Curb Records produced a music video for the song Hollywood Hills which featured Joey on lead vocals, and the Beat Farmers appeared on the television show Late Night with David Letterman, this time with Harris singing his tune, "Hideaway."

Some gigs, however, were just plain strange. "I was onstage with the Beat Farmers at 1st Avenue in Minneapolis and we were kicking ass and taking names. I had just played some kinda hot-shit guitar solo, and walked backwards out of the spot light to cue the light man to hit Jerry Raney for his solo. For some reason there was a ten inch square hole cut in the stage, and as I walked backwards I found the hole with my right cowboy boot. My foot and my leg went straight down the hole and only stopped at my crotch. I was stuck, clutching my guitar, left leg pointing straight out in front of me, right leg swallowed by the stage."

"I remember it took a while for our stage roadie to see my predicament and he sort of rolled his eyes and sauntered around the backline, taking his time to come rescue me. As if he was thinking, bloody Joey, always fuckin' around."

Harris also toured and recorded with Country Dick Montana, Dave Alvin and Mojo Nixon as a member of their Las Vegas style review band, the Pleasure Barons, releasing a live CD on Hightone Records in 1993. Harris was on hand when Montana recorded another project featuring Mojo, Rosie Flores, Katy Moffett, John Doe, Candye Kane, Dave Gonzales and Dave Alvin titled the Devil Lied to Me, posthumously released by Bar/None in 1996.

Country Dick Montana died onstage at the Longbranch Saloon in Whistler, British Columbia, November 11, 1995. The band soon split. “After the Beat Farmers, I wanted to get right back into it,” says Harris. He calls 1995 to 2005 his lost years. “I tried to keep the party going, and I burned bridges all over the place.”

He’s okay now. “I’m very sober — not completely sober, but very sober, which is pretty damned sober. Especially for me.”

Harris toured with his own band, worked with songwriter Paul Kamanski, (author of several Beat Farmer tunes) and Mojo Nixon. He was also chosen by Mojo to play lead guitar on his 1999 Shanachie Records release, Sock Ray Blue. Harris next joined forces with Beat Farmer Jerry Raney and his band Powerthud and released a CD in 2002 called Wide.

After Powerthud, Harris went on to a concept band he called the Joey Show. Over the next few years, he kept busy with a rockabilly-ish side project with Mudsharks’ Scottie Blinn and Tom Essa called Slim & the Crowbars. He also made guest appearances onstage and in the studio with area bands like alt-country Tornado Magnets. His main group, however, became Joey Harris & the Mentals, with Mighty Joe Longa, Jef Kmak, and Josh Mader.

The Mentals are the core membership of the long-gone Powerthud, the post–Beat Farmers band that at one time featured the twin-guitar magic of Harris and Raney. “I have deep respect for him,” Harris says of Raney. “The more time passes, the more I appreciate good, solid, crazy rock and roll. And that’s what this is. It’s more fun now than it has ever been.”

Joey Harris and the Mentals released a self-named CD in summer 2009, on San Diego-based Double Barrel Records. The CD, with ten tracks written by Harris, features Harris on vocals and guitar, backed by San Diego musicians, Mighty Joe Longa, Jef and Joel Kmak, and Josh Mader. Recorded and produced by Mississippi Mudshark, Scottie Mad Dog Blinn, the CD is the first solo record for Harris since Joey Harris and the Speedsters in 1983.

“My friend and songwriting partner Carlo Dimaggio died in his sleep Saturday night,” Harris told the Reader in early 2011. “Carlo was a stagehand at Fourth and B and roadied for the Mentals for the past few years. He left behind many loving friends and a sixeen year old son, Sam.” A service was held at Pioneer Park on April 10.

In Spring 2011, Harris wrote “After seven fun-filled days in the hospital, Mighty Joe [Longa] is coming home,” reports Harris. “He’ll be starting four months of chemotherapy and catching up on alot of sleep. It’s not clear when Joe will be able to return to work or return to the stage...the Mentals will continue playing around town, with a little help from friends like Mojo Nixon and Scotty Blinn.”

In early 2012, Harris joined the Tighten Ups, though he vowed the side project would not slow down his work with the Mentals.