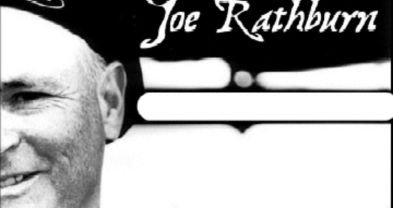 Since 2003, singer-guitarist Joe Rathburn has played on the outdoor patio at the Tin Fish restaurant and bar at the foot of Fifth Avenue. When nearby Petco Park opened, Padre fans would walk by and see him play original tunes and “tropical rock” covers of Marley, Buffett, and Belafonte.

“Each night, a quarter of [Petco’s] attendance walks by. I estimate 750,000 people see me over the course of the season. I’ve played nearly every home game.”

Rathburn won first place in the 2004 Just Plain Folks Music Awards in the Best Traditional Folk Song category for his lighthearted song “The Dad I Had.” It was picked from among 140,000 entries.

Since October 2006 he’s hosted a weekly songwriter showcase called Joe Rathburn’s Folky Monkey, which has garnered a reputation for being one of the best regular acoustic shows in San Diego.

Rathburn was nominated three times for San Diego Music Awards as a performer and twice for his recordings, Little Suns and Rockwells and Picassos.

In December 2005, he released his third CD, Would You Please Welcome Joe Rathburn, Live at Dark Thirty, a double-disc set containing concert performances of 10 previously released tunes and 11 previously unreleased songs. He has represented Taylor guitars at two Folk Alliance Conferences, the 2003 Winter NAMM Convention, and on the Taylor-produced Expression System Pickup DVD.

He performs continuously at festivals, arenas, clubs, churches, and coffeehouses, headlining his own shows and opening shows for others.

Rathburn says his songs can be called Positive Music. “My tunes have purpose and carry with them more than just changes and grooves and catchy melodies, and hooks for the sake of their cool factor. They speak to the heart and mind of the listener directly. They uplift the soul in an instantly tangible way, while remaining fun, interesting, and nonpreachy.”