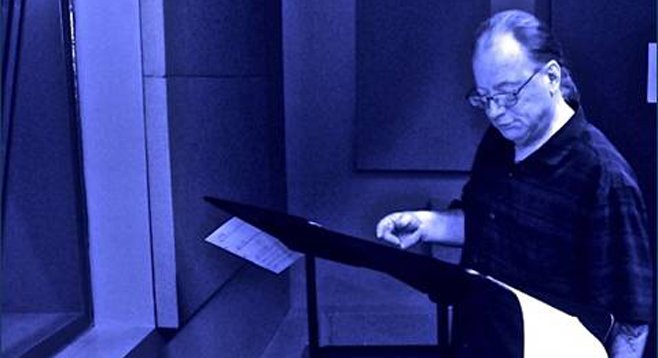 “I’ve been composing since the mid-sixties,” says underground composer/pianist Joe Garrison. “I write music because it’s my nature. I don’t do it for a [tangible] reason, you know, it’s just what I do. I’ve tried many times to quit, but it never made sense.”

It began at UCSD in 1969 when he enrolled as a rock ’n’ roll guitarist in the early years of the school’s launch, a laboratory of new-music exploration, which, he says, “hasn’t ever changed.” He also studies at Cal State Fullerton and the University of Colorado at Boulder.

In the late 1960s, he played guitar with a rock band called the ID. Since 1989, he has performed around town with a large ensemble of local musicians he calls Night People, including trumpeters Gilbert Castellanos and Derek Cannon, trombonist Kevin Esposito, saxophonists Kamau Kenyatta and Ben Schachter, bassist Ben Wanicur, and drummer Fernando Gomez.

“I am really indebted to Gilbert Castellanos and Kamau Kenyatta for their help and support,” says Garrison. “A year ago [2011], I had been out of sight for five years. Thanks to them, I’m able to get back. And the support from players like Rob Thorsen, Derek, Kevin, Fernando, and the staff at UCSD! Without players like them, with their skill and commitment, I could have never done this project.”

Veranda, the debut Joe Garrison and Night People album, was released in late 2012.

“I am used to large groups,” says Garrison. “Fortunately, these wonderful musicians are interested enough in new music that they will participate for very little compensation.”

Garrison released a new CD called The People Upstairs with Night People in 2017, followed by The Broken Jar in 2018.