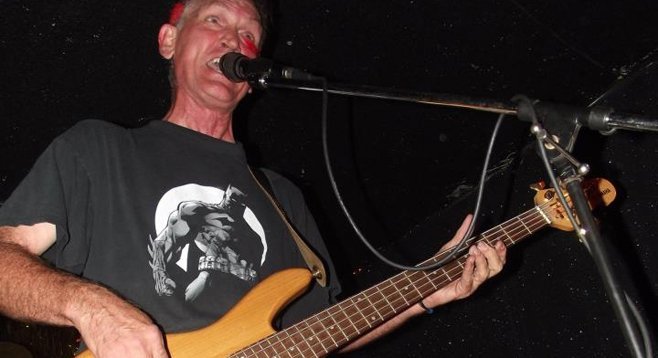 The Cardiac Kidz were a 1970s San Diego punk band that evolved from the group Glass Onion in 1976. Their vinyl records now fetch big money among garage and punk rock collectors. One of their earliest TV appearances was on the San Diego morning show Sun Up San Diego with host Jerry Bishop.

They played clubs and concert venues around town like the now-infamous Spirit club, the Skeleton Club, SDSU's Back Door, the North Park Lions' Club, and the Roxy Theater in PB, though they split after only a few years.

Though only extant for a few years in the late ’70s, singer/guitarist Jim Ryan says they were playing every week at long-gone venues such as the Spirit, the Skeleton Club, the North Park Lions’ Club, the Roxy Theater in P.B., and SDSU’s Backdoor.

“Our first concert at the Back Door was probably our best gig ever because of the excitement of playing for over 300 people. Up to then, we were only doing bars like the Padre Inn and Dick’s at the Beach, which brought in the traditional 30 to 75 [people]. The Backdoor gave us a chance to step up the game. We gave away our single and photo postcards all night, and it was the very first time that someone asked me to sign an autograph for them. It was like A Star Is Born.”

The Kidz reunited several years ago, with various rosters. Ryan's side band the Jim Ryan Project was formed in 2012.

“With our original guitarist Jerry Flack out of commission last year due to back surgery, and too many family obligations to ignore, I found myself with a new decision crossroad,” says Jim Ryan of the oft-reunited punk band Cardiac Kidz. “Do I sit on the shelf and continue on with my life minus the music performance, recording, and creations that came from the resurrection of the Cardiac Kidz? Or do I get off my ass and go forward with my music and creative flow of things to say and stuff to play?”

Choosing the latter resulted in the Jim Ryan Project, which so far has included Billy Rath (Johnny Thunders and the Heartbreakers, the Street Pirates) and Joey Pitner (the Waldos), though the lineup remains fluid, pending schedules, locales, and requirements.

“This is a project full of projects. I have to adapt songs from the Cardiac Kidz catalog to allow different genre musicians to play comfortably onstage with me — an exciting challenge — and it ensures that I get the right mix of growth and experience to push me off the comfy couch of life and expand as an artist.”

With only a handful of performances so far, Ryan is hard pressed to describe the new band’s sound. “As an artist, you don’t want to limit descriptions to a parameter of measurement, but I can report how my fans have described it. It’s a cross between the Ramones and the Monkees, with a twist of power pop, a thrust of Black Flag, and a hint of Bowie.”

Ryan also works as a graphic designer specializing in marketing and display art, as well as occasionally authoring books such as The Revelation Handbook: Surviving the Great Tribulation, published in 2005.

In early 2013, Ryan told the Reader “I’ve accumulated over two CDs worth of recordings under the solo umbrella and just need to put together a nice track theme for the releases...I also have Cardiac Kidz recordings and videos that are in the wings that may be released in postmortem of the Kidz performing any more.” Ryan relocated to Denver, CO in early 2017, where he began working on new Cardiac Kidz tracks.