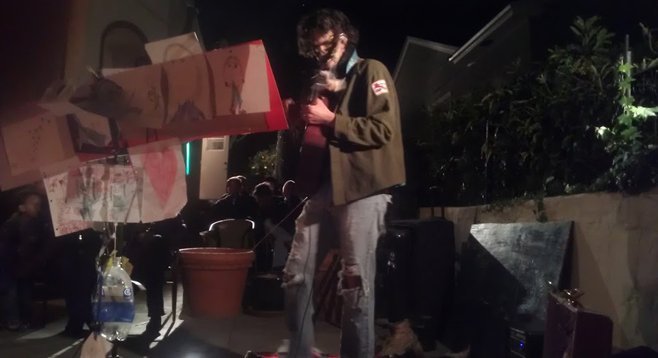 Jesse Eisner started playing guitar and writing lyrics when he was 14, moving through many incarnations of styles and directions, while focusing on his acoustic bluesy-roots. A born again Christian who says he writes worship songs, he took on an alternate persona for his 2013 musical project, Esse Jeisner Retakes the States.

“I went crazy writing this and it all came out,” says Eisner. “‘Esse Jeisner’ says all the stuff that is hard to think about and all the shit we don’t like to acknowledge.”

Shit like leaving an infant brother in a high chair while you hide in the living room because a maniac is running laps on your porch demanding admittance to the homestead.

Eisner spent four months at a creative fever pitch, writing songs and music to try and contain the life story of a young man from a broken home who has raised a grip of kids, watched family members descend into drug addiction, and found God in some strange places. His 2013 musical project, Esse Jeisner Retakes the States, puts all those words in the mouth of a crazy, old, homeless man; the eponymous Esse (which Eisner says “should be pronounced ese, like an L.A. gangster”), who disjointedly chronicles key points in the life of the alter-ego’s alter-ego.

At his best, Eisner occupies the hypnotic drones of low-fi shoegaze and breaks lyrical repetition to deliver thoughtful lyrics: “I’ll follow you into the woods and we’ll drown out our moms and dads.” The show vacillates between on-the-nose Christianity and artful use of Jesus as metaphor for a loved one. It bounces between uncanny Cat Stevens covers and distorted noise that leads to inexplicable in-jokes and spoken-word poetry.

At his worst, Eisner tries to do too much with a simple show. He struggles with reaching out and trying to wrestle abstruse metaphors into submission. That’s not without a little irony, as the story behind Esse Jeisner Retakes the States is a Bildungsroman in musical guise, and great opportunities for growth don’t always come out of successes.

Esse Jeisner Retakes the States’ biggest novelty (and strength) is that it fights through all its own weirdness and ends up being a regular tale from a regular guy.