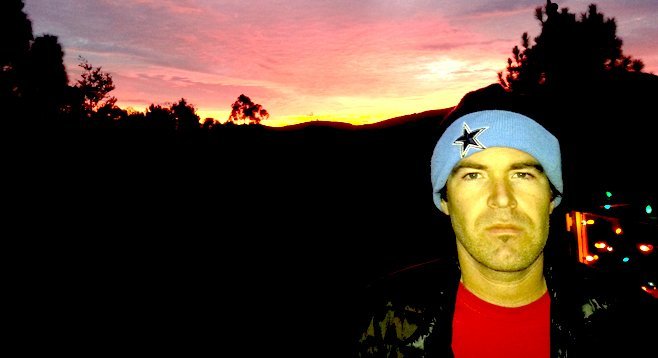 Jensen Rufe was a 1991 graduate of rock and roll high. “The guys in blink-182 were a little younger than us,” says Rufe about Poway High. “But we were pretty much the same age as most of the guys in Louie XIV. I know (singers/guitarists) Jason Hill and Brian Karsig were in our class. I didn’t personally know anyone from Unwritten Law, but I knew they were around.”

A few years after high school, Rufe and three fellow PHS grads launched Puddletown Tom, a “psychedelic, experimental, weird-rock” band that he guesses played 30 shows at the Casbah over its 1992 to 1996 lifespan. “A few times we got to open for bigger bands like Red House Painters, but usually we’d play with other locals, like Heavy Vegetable, fLUF, and Uncle Joe’s Big Ol’ Driver.”

“The San Diego sound of old was a working-class and slightly-depressed sound,” says Rufe. “It featured a sonic assault of guitars, often with that ‘Ditch Digger’ chord John Reis [Rocket from the Crypt] used, a weird, dissonant, diminished, grungy D chord.”

He says a similar diminished chord characterized the playing of Pinback’s Rob Crow (then of Heavy Vegetable and Thingy). “We were friends back in the day. We once carpooled together to a job we had for Greenpeace, gathering petitions outside grocery stores, but we both quit after the first day.”

Puddletown continued while Rufe attended UCLA and came down to play local gigs. “We had a residency at Java Joe's. We played with the Rugburns and Jewel...we played the Casbah and Soma, but we didn't get much of a fan base.” When Rufe went to graduate school for film at Humboldt State, he played in Eureka-/Arcata-area bands and made a lot of music videos.

Rufe moved to L.A. in 2001 and was hired by MTV/VH1, where he edited TV shows like Making the Band, Road Rules, and Real World.

He then began producing documentaries, including one award-winning feature that chronicled the Humboldt music scene. The native San Diegan spent a few years living in Eureka (Humboldt County), and his hour-long documentary Rural Rock & Roll looks at that town’s “very isolated but self-contained -- and unbelievably varied and vibrant -- music scene.”

“There are 100,000 people in Humboldt County,” he says. “There are more people in Escondido than in all of Humboldt, but I would say there are 500 people that staunchly support live bands. Of them, 300 are in bands...there are only two or three venues, a lot of house parties...there were 50 other bands I didn't even get to talk to.” Rufe mixed interviews and live footage of thirteen Eureka bands.

The film’s San Diego debut was July 29, 2006 at the Whistle Stop, where one of the bands featured in the movie, the Ian Fays, performed. By then, Rufe was alread editing reality shows such as Project Runway, The Kardashians, and Bad Girls Club.

He says Puddletown Tom might have survived had it formed in Eureka. “We fell victim to not really fitting in with that ‘San Diego Sound,’ not that anybody ever told us what we were supposed to sound like. Audiences -- and other musicians -- just didn’t really respond to the weirder Beefheart-type stuff we were doing, because it didn’t fit the local mold. The difference in Eureka is that they’d come out and support your band irregardless. Even if you were a 12-piece accordion polka orchestra.”

Rufe next formed a Guided By Voices tribute band called Tigerbomb. “I first saw Guided by Voices at the Casbah because I heard this story about this bunch of old guys who had day jobs and families but still ended up getting signed to Matador Records in their late 30s. It was the American dream. I saw them at the Casbah in 1995 and fell in love with them.”