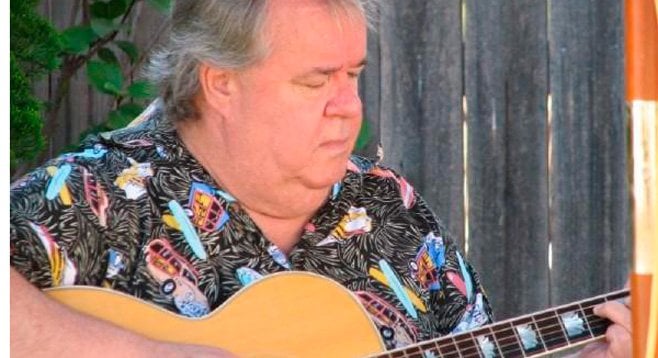 “My checkered past includes skippering a tugboat on the San Francisco Bay and sinking boats as a brown-water river sailor with the Vietnamese Navy,” according to blues singer/guitarist Jeffrey Joe Morin.

“As soon as I left Mar Vista High School [Imperial Beach] in ’65, I got drafted and followed my old man into the Navy. After flunking out of electronics school in San Francisco, I was a deckhand and later craft master on tugboats, working out of Hunter’s Point Naval Shipyard. By January of 1969 I was an advisor to the Vietnamese Navy Junk Force’s Coastal Group 14 on the Cua Dai River, 40 miles south of Da Nang. We stopped and searched river traffic all day. We patrolled and we got shot at all night.”

“In 1969, I killed three Viet Cong fellows in a face-to-face firefight in a swamp on the Cua Dai River in Vietnam.”

When he returned to civilian life, Morin earned a B.F.A. in design from CalArts and began playing in a series of local bands. “I never really quit music,” he said. “I’ve played the guitar for nearly 50 years and the harmonica for 40, and now people actually pay to see and hear me do this.”

In solo performances, Morin specialized in acoustic guitar renditions of Great American Songbook Classics and his own wry and romantic songs. "I sing and play a few hundred of the popular songs of my parents' and grandparents' generations. I like to think that my style won't be accurately categorized, but most of what I write and perform echoes through Tin Pan Alley and the Great American Songbook."

"Like me, my songs are products of the first half of the past century."

In addition to mentoring countless local players, Morin was also a regular guest in the recording studio for artists like Gregory Page. He occasionally performed in Johnson, Bosley, and Morin (aka “JoBozMo”), alongside Jack Johnson and John Bosley, as well as sitting in with a jazz group, the Joseph Angelastro Quartet (sometimes making it a quintet).

He also continued to work his day job for nearly 40 years as an industrial designer. “I art-directed the colorization of Casablanca for Ted Turner,” he told the Reader.

Morin described one very strange gig. “Some friends and I played with the legenday icon of L.A.'s counterculture, Gypsy Boots. He was a fixture on L.A.'s scene for 50 years or more. A nature boy, athlete, philosopher, vegan, Jack LaLane on crack kinda guy. We opened a benefit concert for the L.A. Free Clinic for a radio station. We were in rented grandstands and a stage set up in the parking lot of the Palladium and the temperature was, as I recall, 195 degrees or so. We followed a glam rock band and waded through heaps of sweat-soaked glitter and streamers to play traditional bluegrass music while Gypsy Boots flung himself and his washtub bass all around for an audience of TWO people, besides our friends and family.”

“We were followed by George Carlin, and became his audience of five.”

Morin launched a Kickstarter campaign in April 2012 for an album to be called Big Ol' Heart. "I wrote my first song at age sixty," he said at the time. "A good one, I think. It'll be the last cut on Big Ol' Heart with five other original pieces and a half-dozen standards you may already know."

He admitted that recording his own album was a long time coming. "Every time I perform, friends, venues, booking agents and fans ask about my record...but I make music, not records. So, sick of their nagging, I began making Big Ol' Heart."

In late 2015, Morin announced he was cancelling all gigs and his CD release for a couple months, in order to undergo spinal fusion surgery on October 6. “Due to hundreds of concrete and asphalt body slams off skateboards and bicycles in the ’60s and ’70s, I’ve practically destroyed my spine,” he had told the Reader in 2013.

Morin continued to perform whenever possible while battling various health ailments over the next two years, until he passed away in summer 2017.