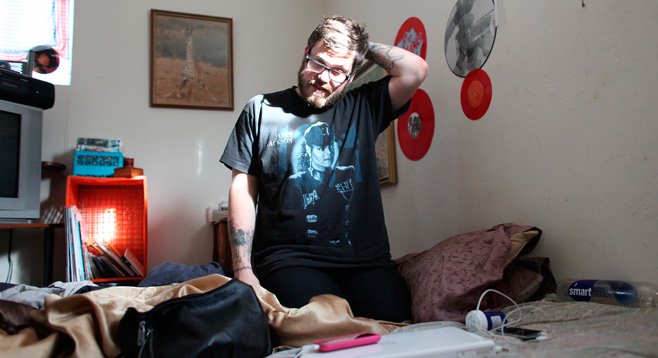 Andrew Caddick, a former band member of Fantastic Magic with Nathan Williams of Wavves, named his next project Jeans Wilder. “It’s jeans. Pants. Pants Wilder. I used to toss around band names all the time, and I could never settle on one. I was starting and stopping projects every two weeks with a different band name.”

28 years-old in 2012, Caddick is a former co-owner of the Tin Can Alehouse. An 11-song full-length Totally (Everloving Records) was released in June 2012, followed by a new video for the lo-fi roots pop song “Blue Dream.”

“There are people that will want Nice Trash II,” he says, “and maybe this record follows along the same mathematics. But even when I was recording it, I thought, People will really like it...or not...I stopped making really outsider music with tape hiss and noise, and maybe I’ve alienated that group. The people who want noise will be disappointed.”

“To make a record this poppy is something I never expected to do,” Caddick says. “I think it’s my best one yet, not to toot my own horn.”

Totally might never have come to pass, if not for a computer glitch. “There was a whole version of stuff recorded that I lost when my computer crashed.” In the meantime, he’d gotten signed to Everloving Records, and suddenly there was budget to get new equipment. “I recorded version number two, which we all decided wasn’t very good. That in turn led to the creation of the record.”

Live incarnations have included players like Marco Piro and Peter LaCombe. The band basically became inactive in the 2000-teens. Then, in late 2018, a post appeared online reading "Jeans Wilder will return in 2019 as Wilder Forever."