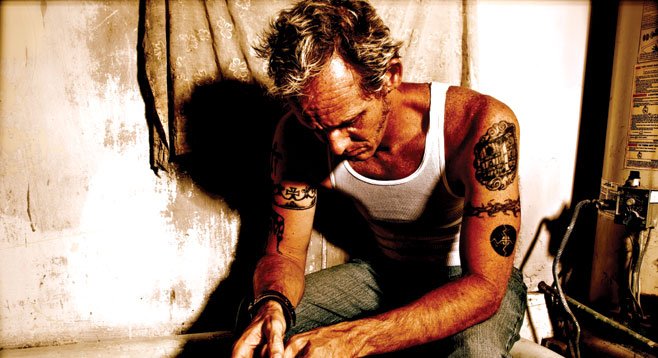 Singer/songwriter J.D. Boucharde went to college with the intention of becoming a Lutheran minister.

His four-album project Contra Mundum (Latin for "against the world") is a biographical odyssey about his experiences with addiction, abuse, and depression. He specializes in telling stories, though not all are based on true life. He sometimes tells audiences that he was only three days old when he gave his first piano recital in the lobby of the hospital where he was born, playing a tune he'd heard playing over the hospital PA ("Do You Know the Way to San Jose?") with "hands the size of teaspoons." As such, it's no surprise that, when asked to describe his music, he spins another chimerical yarn.

"In 2002, just after finishing the Up album, Peter Gabriel stops by Calvin and Hobbes's house to borrow their cardboard-box time machine. Peter puts on the goggles, climbs in the box, and flies back to 1994, picking up Kevin Gilbert. Together, Peter and Kevin travel to 1983, picking up Roger Waters from Pink Floyd, and six more years back to get Randy Newman from 1977. The four of them scoop up Elton John from 1973 and Brian Wilson from 1960 and they all arrive in 1956 at Sam Phillips's Sun Studios in Memphis. There, they order out for ribs, buy several cases of beer, and write 147 songs, recording 23 of them in one extended four-day weekend. They fly the time machine home, exhausted, each to their respective eras, but promising to write each other."

Boucharde's one-man musical Happy Songs about the War -- co-created with local theater maven Leigh Scarritt -- debuted in 2008 at [email protected] in Hillcrest. “It was a musical multimedia call for non-violence,” says Boucharde, who partnered with website-designer Josh Callow for the show’s elaborate Pink Floydian visuals.

"It started as a concept album about the war in Iraq that I rewrote as a stage show," says Boucharde. "Then, my wife and I bought a house, and our new next-door neighbor was Leigh Scarritt.... This name meant nothing to us, but everyone we spoke to seemed to go ga-ga when we mentioned her."

Scarritt is a Tony Award-nominated actor, playwright, director, composer, and choreographer with a long history at [email protected]

"So I brought it over for her to read.... She liked it and immediately offered to direct, free of charge. She immediately sold [email protected] owner Dale Morris on it and -- bam -- without even blinking, I'm workshopping my first drama production."

Though he scripted the show, Boucharde says, "I definitely didn't write it; it came through me. My name's at the top of the page, but it's no more mine than any of my songs, and this even less so; it was more like vomiting than writing."

Boucharde snagged national press in 2011 when he was joined onstage at the Turf Supper Club by local-boy-gone-glam-star Adam Lambert, who had taken his father to the Golden Hill eatery for Father’s Day. “I hadn’t heard him sing, though I had heard of him,” says Boucharde.

“I don’t watch television, and I sure as hell don’t watch American Idol. Don’t get me on my soapbox about America’s obsession with turning every worthy thing — and even a good many non-worthy things — into a competition. But I sat there and talked to him for a half hour or so. Cool kid. I’ve known his dad and his dad’s wife for a few years. They live in South Park: really, really good people, and I sat and talked with the three of them in the corner of the restaurant.”

As of summer 2012, Boucharde had a regular gig at the Turf Supper Club every Sunday night at 8 p.m., and he made his main living teaching piano and playing occasional sessions. He taught up to 30 students, ages four through adult.

"'Femina' is a duet ballad with fellow San Diego singer-songwriter Jill Nooren about a young woman trying to decide if she's going to break her silence about her sexual assault," says Boucharde. "It's co-directed by locals Kristy Walker and Carlos Sanchez, and dedicated to my mom: she was raped at a party in college and told no one about her experience for forty years. One day, apparently out of the blue, she decided to tell my father, then told my sister and me, then started speaking to groups of women with the hopes that her story might help someone else. I'm sad to say she's not here to hear the song, she passed away in February."

A lyric video was released for the single's flipside "All." "We were going to film both this summer, but I'm still dealing with the ins and outs of my mom's estate, and couldn't make it happen."