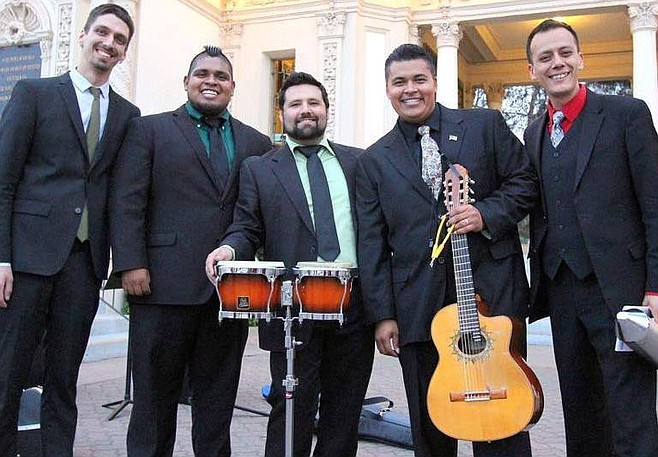 Jarabe Mexicano performs a wide repertoire on a variety of traditional instruments, with arrangements
characterized by harmonized vocals in Spanish and English. Along with traditional Boleros, Huapangos, Sones, and Rancheras, the band performs contemporary Cumbias, revamped doo-wop, and American standards, as well as mashups like "La Bamba" crossed with the Beatles' "Twist and Shout."

“We have ties on both sides of the border,” says singer Gustavo Alcoser. “And our music reflects that. We’ll play rock-and-roll and cumbia.” He says the roots of that genre mix lie in his upbringing. “We listened to everything when I was a kid. My mom was a big John Wayne fan. Also the golden age of Mexican films. I grew up listening to both.”

Jarabe’s five Mexican-American members are bi-lingual, with extensive backgrounds in music education. Their educational residencies include advance Skype sessions with students and teachers followed by participatory workshops for students of all ages.