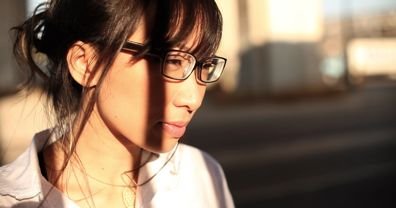 Jane Lui has been playing the piano since she was four years old but didn't begin looking at music for a career until she found herself at UC San Diego, studying communications.

Her love story with music began when she started studying classical piano, listening to tapes and the radio. “I had every cassette of Hong Kong pop star, Anita Mui lined up in chronological order. I listened to them on repeat and sang at the top of my lungs to imagined throngs. Singing made me feel useful. I fell asleep to the radio every night — like I had a friend.”

Disinterested in narrative or correct grammar, Lui prefers nostalgic impressions. “A goal of mine is to create a sense that you’ve felt this before, but have never put words to it.”

Having left Hong Kong for the United States at twelve, Lui reaches across ethnic boundaries as well as musical genres. “There was a time I forgot I was Asian,” Lui recalls, “I wanted to be white and I wished I could fully live in the American way. I couldn’t speak Chinese or English very well and felt somewhat alienated from both cultures. I don’t want to be labeled Chinese-American, but now I feel better about being Chinese and I comfortably call myself American.”

“I usually play solo,” says Lui, who started doing the unaccompanied thing on San Diego stages on Valentine's Day 2004, “but I really like doing duets for the thrill of stage chemistry.”

When she was part of the duet Jason and Jane, the Hong Kong native opened for Jason Mraz before that local boy went big time. When asked if Mraz has changed since, she says, “I honestly don't know. We haven't kept in touch.”

Lui integrates left and right brain to produce her own videos and play fourteen instruments including piano, guitar, xylophone and harmonium, not to mention Ikea wine glasses, handmade music boxes and fireplace brushes against walls. “You’re poor in college — don’t have stuff, so you make it up. Found objects sound grittier, dirtier and more acoustically imperfect than manufactured ones. If they rust, they rust then resonate differently.”

True to her independent spirit and mastery of choral music, Lui is largely responsible for her own sound. She records most of the music with a mobile studio and mini-disc in classrooms, churches, recital halls, houses, and 19th century sailing ships. “Accidents and lack of budget can give life to music. I’ve never worked in a huge recording studio,” says Lui, “I’ve always had a small board and moved wherever I needed to. On location, the sound lives more vibrantly in 3-D and it has become my favorite way of working.”

The curious can find some of her moody and narrative piano-driven songs like "Pigeon Woman" and "Freddie Goodtime" at www.myspace.com/janeshands. She says two of her main influences are Tom Waits and Tori Amos, and you can hear it.

"For a long time, no matter how much I rehearsed, it all went out the window when the show began. I go to a unique place when I play, where my mind and voice don't want control of everything, so things can be loose for color changes. It took a long time, but when I finally accepted this, I began writing for the piano with respect. The piano's voice needs space and development just like ours.”

“I often have weird dreams of playing live,” says Lui. “I think I have them because live shows are still new to me. Twice I heard and saw music at the edge of my waking. When I woke up, I walked over to the piano and played it like I never have before.”

Lui's first album Teargirl was released in 2005, with one of its songs, “Freddie Goodtime,” nominated for a San Diego H.A.T. Award, honoring local acoustic talent.

Her album Barkentine was launched with a September 2007 CD release party at Lestat's. It was nominated as Best Recording at the 2008 San Diego Music Awards. One track, “Firefly,” was featured by Sony on the mylo Internet device, a portable iPod-sized computer that uses Wi-Fi for Internet connection. “Freddie Goodtime” from her previous album was also featured.

In late 2010, she self-released Goodnight Company, beginning with two tracks treleased online, “Illusionist Boy” and “Jailcard.” “This album has the most production value of all my albums,” says Lui. “I let the reins go and allowed the songs to speak for themselves. I’m at a much happier point in life — more confident to let my co-producer, Aaron Bowen bring out the real ‘Jane.’ These songs feel best to me.”

Using PledgeMusic.com, Lui raised over $11,000 in two months to fund 50% of the album. “I couldn’t believe how much people wanted to help and it’s made the project more real now that I’m responsible to my fans. YouTube really helped,” she says, “The world is watching; it’s crazy.”

In 2011, her “Cartoon Medley” with Paul Dateh was heard on Virgin America’s in-flight entertainment through October and November.