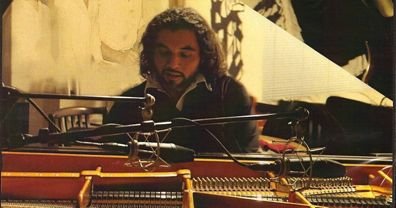 Pianist, composer, and arranger Irving Flores is a fiery Latin-music giant who has been manning the keyboard chair in the Gilbert Castellanos New Latin Jazz Quintet for many years.

Flores was born in Veracruz, Mexico, where he began studying the organ at age six. His father, Irving Flores Sr., was with the famed Orchestra Tampico, and it was from him, that young Irving began to learn saxophone and arranging. On one occasion, the Orchestra was surprised to discover that one of their arrangements was actually the work of the younger Irving Flores. While a teenager, Irving moved to Mexico City, switching to piano and developing as a composer and arranger.

At the University of Tampico and the National Music Conservatory of Mexico City, Flores continued his studies, learning to play, compose and arrange for orchestras and small ensembles. He later continued studies in Afro-Cuban and Brazilian percussion, contemporary harmony, and jazz theory and improvisation, among other genres.

In 1995, he received a sponsorship with Yamaha to give clinics and workshops throughout Mexico, later earning an Emmy Award for his work on the music video “All Together,” featuring several other Mexican jazz artists.

In 2009, Flores was asked to step in for famed pianist and director Oscar Hernandez for a show in Mexico City with the renowned Spanish Harlem Orchestra. He was also flown back to Mexico for an arranging and recording date with the one-and-only Armando Manzanero. His music arrangements also include a “Tribute to Frank Sinatra,” performed by the San Diego Chamber Orchestra, an arrangement for strings for Luis Miguel, and an orchestral arrangement of a Dave Scott composition for the San Diego Youth Symphony.

His own album Recuerdos, featuring original compositions by Flores, was nominated for Best World Music Album at the 2010 San Diego Music Awards. Recorded at Hiro Ikezi Studio at the Ikezi Music Foundation, the album is a tribute to Flores’ musical roots.