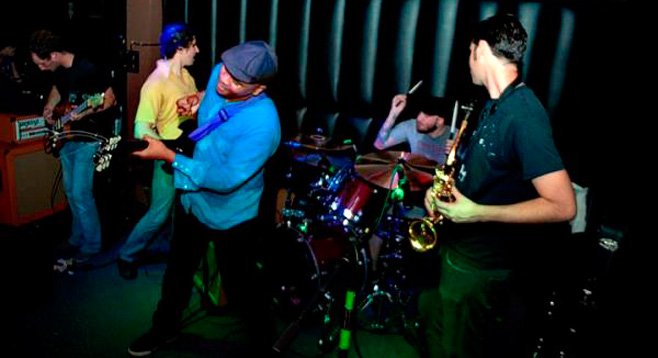 When your band has two lead guitarists, it's a safe bet you're gonna attract more metalheads than mopers. When the members of indie/psychedelic/soul band Irradio were asked to describe their music, singer/guitarist Dan Dasher -- the only member to survive all Irradio incarnations -- said "blues-punk."

Formed in 1999, Irradio recorded 2002's Semantic Noise at Sweet Sound Studios with Ruben Montoya, and 2004's Make-Up for the Inaugurated, with Ben Moore (Hot Snakes, Rocket from the Crypt) at Signature Sound. The Sexy Wolf demos were released in 2006 on Lola Records. Their music has appeared on the Discovery Channel's Urban Explorers and on compilation CDs (Insound, Magnet, Amp).

Former Irradio bassist Anthony Rogers-Wright says producer Alan Parsons mixed three tracks on their 2006 album One Sound, and invited the band to his home in Goleta, just outside of Santa Barbara.

"For a guy worth 50 million dollars, he had a real modest two-story house. His wife Lisa served us wine and cheese.... When I went into the kitchen, there was his platinum award for doing [Pink Floyd's] Dark Side of the Moon just sitting on the floor, propped up against the wall."

Rogers-Wright says the band then went out to dinner with Mr. and Mrs. Parsons. "Every car in the lot was a Beemer, a Humvee, or a Lamborghini.... [Alan's] wife is a real wine connoisseur, and every time another bottle got ordered, we'd all look at each other and be thinking, 'How are we going to pay for this? Are we gonna end up doing dishes or going to jail?' The bill was adding up to around $2500!" The band lucked out when Alan Parsons palmed the check. "He just said, 'Let me take care of this. You can pay me back after your first Grammy.'"

Edgar Alminar went on to play with the Kneehighs, where -- as DJ GarGar -- where he was joined by three MCs: Talls, DaDa, and Dalton.

In 2009, Irradio released I Am the Horn, on local Blindspot Records (Staring at the Sun, etc.), produced by Mitch Wilson (No Knife). It won Best Rock Album at the 2009 San Diego Music Awards, and the band played the annual SXSW music fest in Austin, Texas for the first time.

After a few gigs in October 2010, the band essentially went on hiatus for around a year. A reunion performance happened September 4, 2011, at the Casbah.

Ny late summer 2014, the band was holed up at K Street Studios, working on tracks like “Crooked Sand” and “Great Escape,” for a new album due in 2015 on local Blindspot Records.

As of 2017, Edgar "DJ GarGar" Alminar was in the band Jumbotron.