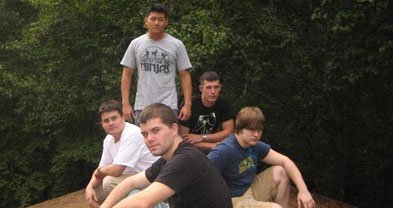 “There were maybe two venues in Harrisonburg for people to play,” says Inside Switch singer-guitarist Peter Tennyson, who with bandmate and brother David Hicks (bass) moved the entire band from Virginia to San Diego last year. “I spent all my savings from working while finishing college, about $1000, on the move out here. It was very daunting, dropping everything, including a very good job. It took me about two months to find work [in San Diego], with the recession being in full swing and the job market being practically dead.”

The group’s first local hookup was with Larger Than Life guitarist Devin Schlichting. “I met him when we worked with disabled kids and pulled him in on the project. We first set up in Mission Valley, but since we spent all our time drinking in PB anyways, we just decided to move there. Devin lives with us now, and we all work as a big happy family out of our house.” The band also includes drummer Steven Owens. “Our first local gigs were for private parties and for a charity downtown.”

So why switch to San Diego, rather than L.A., Nashville, Austin, or someplace musically akin? “We fell in love with the culture when visiting San Diego,” says Peter. “Plus, we really wanted to try and be a part of something special with local flavor, rather than being just another act in a hugely saturated market. We also felt the bipolar qualities of our music suits the eclectic scene in San Diego, from soft piano ballads to harder alternative guitar-driven rock.”

The group, based in Pacific Beach, cut their first album in late 2009 at Capricorn Studios (Fountains of Wayne, Comedy Central, Toni Braxton).