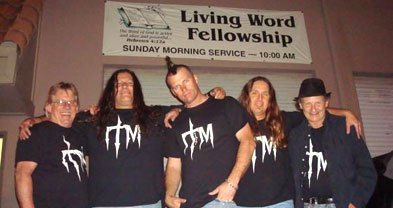 “Drugs used to do for me what a phone booth did for Superman,” says Gary Lee Ernst, singer and guitarist for Christian rockers In the Midst 777.

“I was in and out of jail about a dozen times for meth-ing around, until I was sentenced to a three-year prison sentence and sent off to Donovan prison.”

It was there the former Helix High stoner says he had his religious conversion. During a lengthy stint at a Vista rehab center where he took part in the Casa Bible study program, Ernst says, “I started sponsoring some of the men in the program. That’s where I met our drummer Anthony Valenzuela. The second person I sponsored also graduated and is now our lead guitarist, Greg Kappes.”

Three years later, along with guitarist Lyonel Padilla and bassist Bill Brubaker, the band has played over a hundred gigs.

Valenzuela says that his drug addiction started in high school. “After that, it was all downhill, without a clue. After countless times in and out of jail, and then prison, something needed to change. For me, the only thing good that came out of prison is that I got baptized.”

Kappes, whose convictions involved meth and probation violations, says, “In 1999 I was sent to Chuckawalla Valley State Prison for several years…I was released, but my issues with addiction were never properly addressed. I ended up back in prison in 2006.”

After meeting Ernst and deciding to form the band, Kappes says, “There were a lot of obstacles in the early going. As residents, we weren’t allowed to have instruments at the program.”