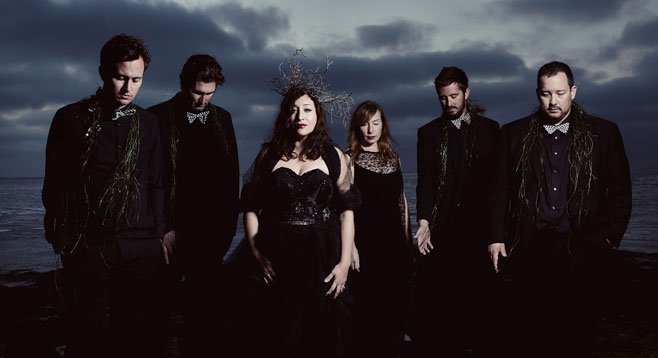 In 2006, with the departure of Duane Pitre and Hank Morton, the remaining members - Matthew Baker, Geoff Hill, Blanca Fowler (aka Blanca Rojas, aka Blanca Lucua), and John Mattos- released their sophomore album, Leaving Sans-Souci (2006), earning multiple accolades at the San Diego Music Awards, licensing music to several independent films, and even landing airtime on MTV’s Sorority Life, Road Rules, and Sorority Life, as well as a handful of skateboarding videos.

After around two years off, the band returned to the stage on their first live show in over two years on November 8, 2013, at Soda Bar. The event marked the debut of new members Carrie Feller (formerly known as Carrie Gillespie, of Tactical Ffever and Street of Little Girls) on Rhodes/backup vocals, and guitarist Demetrius Antuña (Goodbye Blue Monday, ANA/KATA, the Dropscience), who had been playing alongside Ilya founding guitarist Matthew Baker in the 9-piece orchestral post-rock outfit KATA for the past few years.

The revised lineup was filled out by Blanca Fowler (aka Blanca Rojas, aka Blanca Lucua), Geoff Hill, and John Mattos. "We are playing a mix of new and old songs," said Baker. "Our new songs are a little bit darker and bigger than our old material, perhaps more lush in some cases. With that said though, we still sound like us. After being on hiatus for so long, we have all had to relearn our songs, and in some cases, change roles. For example, older songs that I played keys on, I’m now playing guitar and vice versa."

In 2014, they released their third album, In Blood, a collection of dark beautiful songs with deep attention to dynamics and mood, and a precision-like love for the subtleties and silence too often overlooked. The newest lineup was anchored by guitarist Demetrius Antuna and Carrie Gillespie Feller.

In Blood was re-released September 30, 2014, by the reunited rockers, who supported by playing the Casbah (August 16) and the San Diego Music Thing (September 13). Its two bonus tracks, “Could It Be” and “Surround Me,” were released as singles.

As of 2015, Carrie Gillespie Feller was also playing with Lunar Maps, as well as starting a new solo project called Hexa. Ilya announced that their final show would be November 13 at the Casbah.

Blanca Fowler (aka Blanca Rojas, aka Blanca Lucua) and John Mattos formed Dreams Made Flesh, which made its live debut in May 2016 at the Hideout.

Demetrius Antuña and John Mattos formed Warsaw along with Rebecca Antuña and Lance LaFave (both of Kata), with their debut performance taking place November 10, 2016 at the Whistle Stop in South Park.
Warsaw's first release was a self-titled six-song EP.