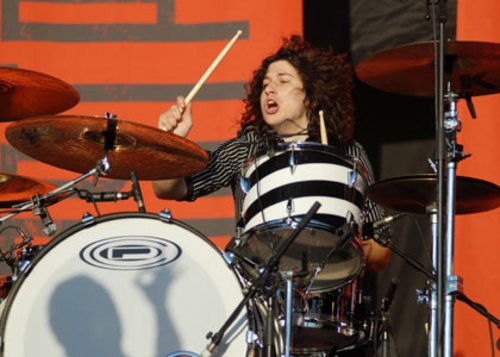 Ilan Rubin started his music career while still in grade school, picking up the drums at age eight and, in quick succession, mastering the guitar, bass, and piano. “When I was a lot younger, I had been advised by older musicians to get out of music altogether. Encouraging! But I’d have to say the sentiment that rings loudly with me is that if you truly believe in what you’re doing — and I don’t mean ignorantly and stupidly thinking you’re great — stick to your guns and see it through. My parents always told me to pursue what I do, always work on getting better, and to always be smart, since the industry is notoriously unstable.”

He was 11 when he performed at Woodstock 1999 with the local band Freak of Nature (aka FoN). Alongside his brothers Aaron (guitar) and Danny (bass), FoN. also appeared on several Vans Warped tours, and Modern Drummer magazine declared him “Best Undiscovered Drummer Under the Age of 18” in 1999.

Hitting the concert trail with NIN only made Rubin more aware of his OCD tendencies. “Before going on tour, I do have a bag of medicine for practically every illness. I’m paranoid of getting sick on tour.”

Rubin released a solo album in 2008, Coup, recorded under the band name The New Regime, a moniker he kept for a 2011 album Speak Through the White Noise.

In October 2011, it was announced that Rubin had joined Blink 182 moonlighter Tom DeLonge in the band Angels & Airwaves. Several weeks later, videos of Rubin playing the Guitar Center Drum-Off finale at Club Nokia in Los Angeles in January 2012 were posted online, including footage of legendary drummers Mike Portnoy (Dream Theater) and Dennis Chambers (Carlos Santana) at the same event.

24 years old in early 2013, he toured Australia performing with Tennessee band Paramore (with whom he also played on their new album) before rejoining Nine Inch Nails. In May, he debuted his New Regime Exhibit A EP.

“When it came time for a third release, I had enough material for almost two full-lengths,” says Rubin. “But, unlike my first two albums, these songs weren't written with a definitive vision in mind. I realized that this broader spectrum of ideas was an exciting thing. I could release the music as a series of EPs. I call them 'Exhibits,' a collection that I can and will constantly be adding to.”

Rubin's skillful hands have other handy uses, he says. “I can cook some pretty delicious eggs. I do that thing where you put a little bit of water in the pan while the eggs are cooking, and then place the lid on so the yolk cooks enough without having to risk the flip. However, my flipping skills are pretty damn good, and I make a pretty mean eggy in a basket. The trick there is to use bread slices that are big enough to press out a good sized hole with a glass, without compromising its structural integrity.”