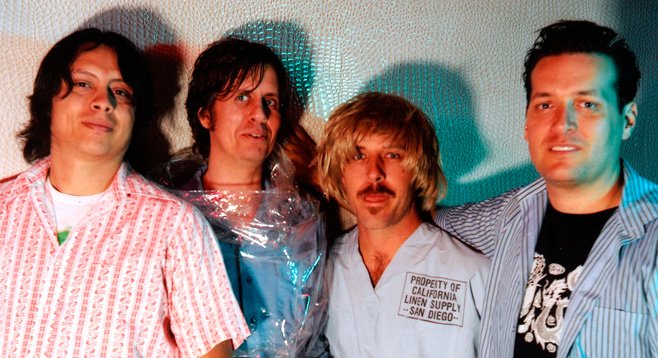 Sound description: Hot Snakes' sound is much more primal than that of Pitchfork, Drive Like Jehu, or even Rocket from the Crypt.

RIYL: The Wipers, Suicide, Rocket from the Crypt, the Sultans, the Burning Brides, the Black Heart Procession, Pitchfork, Drive Like Jehu

Four 7-inch singles are being released in advance of their next album, beginning with “Checkmate” (November 2019) and the just-issued “I Shall Be Free.” A support tour kicks off February 27 in Phoenix, AZ and wraps March 12 at the Belly Up.

Hot Snakes, led by Rick Froberg and John Reis, formed in 1999. Growing up, the duo played together in the local post-hardcore band Pitchfork from 1986 to 1990. Following that they formed Drive Like Jehu, which gained the attention of major labels and resulted in a record contract with Interscope Records.

By this time, however, Reis had become seriously involved with his other band, Rocket from the Crypt.

In 1995, Drive Like Jehu stopped playing together. Reis would continue to work with Rocket from the Crypt until 2005, while Froberg moved to New York to start a career as visual artist and illustrator. Later, Reis started on a new project with the Night Marchers.

Hot Snakes essentially began as a side project in 1999 while Reis was taking time off from Rocket from the Crypt, who was in between record labels and had lost its longtime drummer Atom Willard.

While searching for a new record label and drummer, Reis started his own label Swami Records and experimented with other musicians, resulting in the formation of both Hot Snakes and the Sultans. Hot Snakes originated when Reis recorded a batch of songs with Delta 72 drummer Jason Kourkounis, then contacted former bandmate Froberg to contribute vocals to the tracks.

Most of this recording session was released in 2000 as Hot Snakes' first album Automatic Midnight, which was the first release by the Swami label.

Hot Snakes represented a new challenge logistically: Reis lived in San Diego, Froberg in New York, and Kourkounis in Philadelphia. This resulted in sporadic and intense touring and recording schedules. When a full touring band was needed, Gar Wood (Beehive and the Baracudas, Tanner, Fishwife) was called in to play the bass guitar. After some touring, Reis returned to work full-time with Rocket from the Crypt.

In 2002 Hot Snakes reconvened to record the album Suicide Invoice and to tour the United States. The following year, Kourkounis left the band to play full-time with the Burning Brides, and Reis once again returned to work with Rocket from the Crypt.

When Hot Snakes again returned to the recording studio in 2004, Rocket from the Crypt drummer Mario Rubalcaba (Black Heart Procession, Clikatat Ikatowi, 411, Chicanochrist) was brought in to play the drums. The album Audit in Progress was released and the band extensively toured the U.S., as well as Europe and Australia.

While on tour in the U.K. that fall, the band recorded several songs for BBC radio at legendary British DJ John Peel's recording studio. Their performance would be one of the last for Peel's program, as he died shortly afterwards. This session was released as the Peel Sessions EP, which replaced a planned single for the song "Braintrust" in the U.K. market.

In May 2005, while on tour in Australia, Hot Snakes recorded a live in-studio performance at ABC studios for Australian radio station JJJ. On their return to the US, Reis announced in a July 7 hand-written letter posted on the Swami Records website that the band was breaking up.

Audit in Progress was named "Best Punk Album" at the 2005 San Diego Music Awards; shortly afterward, Reis announced that Rocket from the Crypt would also be breaking up. That fall, Hot Snakes contributed a cover of the Government Issue song "Time to Escape" to the soundtrack to Tony Hawk's American Wasteland video game. This was the last song recorded by the band.

Their live Australian radio session was released posthumously in 2006 as Thunder Down Under.

Following the breakup of both Hot Snakes and Rocket from the Crypt, Reis focused his energy on running his Swami Records label. He continued to perform occasionally with Rubalcaba in the Sultans until that band's breakup in January 2007, and continues to run the Swami label.

Rubalcaba also plays in the San Diego band Earthless and is part owner of an independent record store called Thirsty Moon Records. Wood continues to record music and play in Beehive and the Barracudas, while Froberg resides in New York and works as a visual artist and illustrator.

Hot Snakes reunited onstage in 2010, for the encore of a show headlined by Night Marchers and Obits, Froberg's NYC band.

The band reunited again in late 2011 for the All Tomorrow's Parties Nightmare Before Christmas fest in Minehead, UK (December 2 through 4). Froberg, Reis, Kourkounis, and Wood also played a (mostly) unannounced Hot Snakes show at Bar Pink on November 4, 2011.

Early the following year, the reunited band went on tour with fellow locals and Swami Records label-mates Mrs. Magician. In September 2012, they played L.A.’s FYF Fest, along with fellow locals the Soft Pack. Their reunion tour brought Reis and Froberg to the Casbah on December 3, 2012, plus they played Phoenix and did three shows in Australia before the tour wrapped up.

Their song “This Mystic Decade” can be heard on the soundtrack of the Grand Theft Auto V video game, released in Autumn 2013.

An unannounced reunion performance took place January 30, 2017, at Bar Pink. Within a few weeks, Reis and friends were recording tracks at Singing Serpent studio for their first new album since 2004's Audit in Progress. In August 2017, they signed to Sub Pop Records and announced plans to release a new album. A short tour was launched in November, taking them from Long Beach to Philadelphia on a 10-day run that included stops in Brooklyn, Portland, San Francisco, and Los Angeles.

In January 2018, Sub Pop reissued three Hot Snakes albums on colored vinyl and cassette: Automatic Midnight, Suicide Invoice, and Audit in Progress. Another short tour was mounted that March. Their next album Jericho Sirens was preceded by a single for “Six Wave Hold-Down.”

The merch booth for their 2020 west coast tour, kicking off February 27 in Phoenix, AZ and wrapping March 12 at the Belly Up, included a new limited edition 7-inch single for "Checkmate" (their first new song since 2018) b/w the previously unreleased "Not in Time." The tour featured Rick Froberg and John Reis (both also of Pitchfork and Drive Like Jehu) along with bassist Gar Wood and drummers Jason Kourkounis and Mario Rubalcaba.

Four 7-inch singles were released in advance of their next album, beginning with “Checkmate” (November 2019) and “I Shall Be Free” (February 2020).