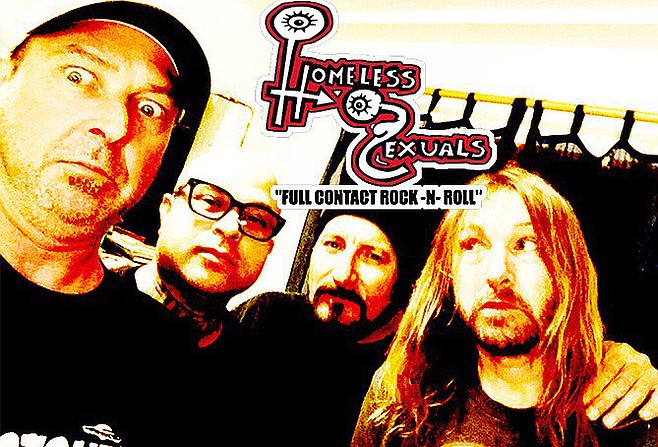 "Some people tell me, 'No way I'm hanging out in a fag bar to see a punk rock show,' " says Davit Buck of the Homeless Sexuals, who used to appear frequently at Hillcrest's Brass Rail. "I can see how some people might think it's a gay show, since the flyer has a shirtless...dude in a blue g-string...but we personally love women, probably too much."

Buck says he's been mistaken for a homosexual before, which doesn't bother him.

"I performed in San Francisco in pink little girl's underwear and white stripper gloves, and a guy called me a fag and wanted to fight me. It made me laugh to be called a fag in San Francisco.... Yeah, I perform in diapers and pajamas and do things that the average person might consider gay, but if you're not a fag, then seeing the Homeless Sexuals play at a gay bar in Hillcrest ain't gonna change you one bit. And, if it does, then you should thank us for setting you free."

After an extended hiatus, the Homeless Sexuals reunited its 2005 lineup for several early 2010 shows. “I’m kinda on rock ’n’ roll probation,” says Buck. “If I break any equipment, the other guys will quit again. I do understand their concerns. You work on songs, practice for years, and then onstage the singer runs around naked, smacking his wiener on the cymbals… I even destroyed a guitar amp by climbing on top and spilling beer into it.”

Buck claims to have difficulty doing a “normal rock show. It’s hard for me because once the music starts I just black out and go into that weird world. Even at practice the other night, I accidentally kicked the mike into the guitarist’s teeth.”

The band splintered again in late 2010, with Buck going on to form a new band, Zillion Happy Volts. Other members went on to play with Mice and Death Crisis. Within a couple of years, however, the Homeless Sexuals were again recording and turning up around town.

An all-new group of Homeless Sexuals backed singer Davit Buck when they debuted June 29, 2013, at Soda Bar. “I’m still friends with everyone in the old band,” says Buck. “Poe emailed me...says he wasn’t into playing guitar anymore. Rob Logic [guitar] quit to concentrate on the bar business and is booking shows at Bancroft in Spring Valley, where Poe bartends on Saturdays. Chris Menna [drums] is busy teaching music to high school students. That’s his priority.”

Drummer Chris Carrol (formerly of the Old In Out) replaced Tim Helton in early 2014, with the band playing the Casbah for the first time in eight years on May 4. “Last time we were booked there was with Battalion of Saints, and I got arrested and couldn't make the show.” says Buck. Shortly after the Casbah show, Carrol left the band.