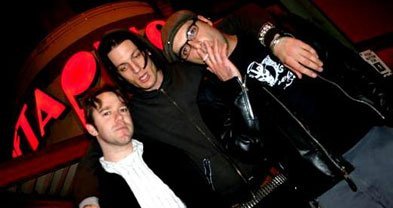 Sound description: A punk rocker and a butt rocker in a hair-pulling fight.

The troubled economy may not be affecting concert ticket sales of top-draw bands, but what about local acts like Oceanside-based Hillstreet Stranglers?

“Being the only one in the band with a job,” said singer-bassist Dick Strangler in October 2009, “I can see the effect that the economy has had on the members of my band. It’s been hard to get our new release out because not everyone can pitch in, but I try to remain optimistic.”

Strangler expressed a similar concern for fans of other North County bands: “We know that many people are having a tough time right now. That’s why we try to keep the shows we play cheap or free.” Contrary to some of the other bands’ experiences with the recession, Strangler says, “I’ve found that the fan base has gotten better. It seems that instead of big arena shows, most people have been attending small dive-bar shows. The glitter and glitz crap is gone, and I say good!”

The band eventually went their separate ways, though a reunion was staged on November 13, 2014, at the Boar Cross'n in Carlsbad.