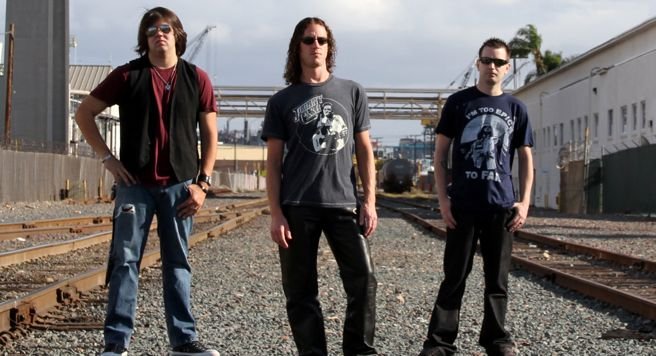 Fronted by singer-songwriter-guitarist Darryn Kelly, Heretic’s roots go back to when Kelly was a student at Indiana University and began writing music that would become the foundation for Heretic’s sound. After graduation, he moved to San Diego with the stated intention of “putting together a rock band to end rock bands.”

In 2010, bassist Dontchev was replaced by Mike Byrnes. A new album Blue Fires Away was released in May 2011. “The album artwork was a continuation of the cosmic Hubble imagery from our first EP,” says Kelly. “We just lucked out and found a shot that sort of visualized the album title.”

Unfortunately, right before the album release gig, Kelly was diagnosed with a vocal polyp and the remainder of 2011 had to be spent recuperating from surgery and building his vocals back up. In the process, Daniel Caruso was added as a permanent member of the band on drums, while Wil Lopez was brought in to fill bass duties.

Kelly says his vocal polyp surgery forced him to “overcome incredible setbacks” in order to perform with the band (for the first time since early 2011) on February 24, 2012, at Brick by Brick. I asked him via email to elaborate, mentioning, “In a world full of people losing limbs and dying of cancer, vocal polyps by themselves don’t sound very incredible...”

Kelly replied “Yes, people die of cancer, lose limbs, and all sorts of other nasty things. But when you’ve based your entire life to achieving something that requires you being able to sing and suddenly there’s a possibility that you’ll never be able to do that again, I think it’s fairly serious.”

New drummer Daniel Caruso and new bassist Wil Lopez made their live debut with the band on February 24, 2012, at Brick By Brick.