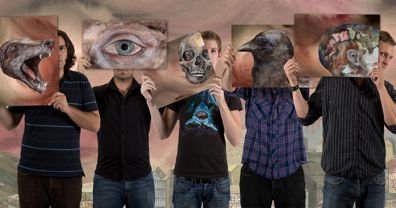 Influences: Counterfit, Minus the Bear, Pinback, No Knife, Mew, Death Cab for Cutie

Members of the Helen Earth Band have also played with the Jon Rauhouse Sextet and Finch. Composed of brothers Marc and Adam Allen (guitars and vocals), and Trevor Vieweg (bass, height), the group creates music that is in turns powerful and ambient, minimal and complex.

The group released its debut album Our Own Ghost City in November 2009. Shortly after its release, drummer Brian Evans and Jeff Livingston (keyboards, vocals, percussion) left the band.

In 2010, the remaining trio recorded the song “Killing a Camera” by Chicago emo-math band Braid for a tribute album from U.K. indie label Too School for Cool. Braid was a common reference point for the Allen brothers, who have been working on Helen Earth Band material since 2004.

“[Braid was] great at building and stopping on a dime,” Marc Allen says, “changing the feel, changing the mood, and smacking you in the face over and over again.”