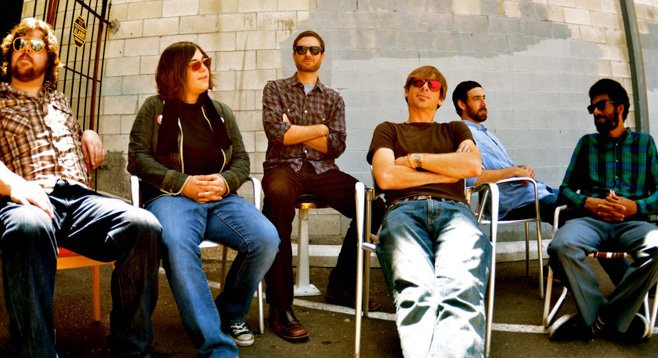 “At the time,” says Howard, “I was pretty certain of an imminent and longstanding divorce from music, at least in a live setting -- I did still have a stereo. Then, as I reintegrated into the real world, I had the swift-kick realization that I was not particularly good at many things. In fact, you could probably strip the M off of MANY and rob THINGS of its plurality, and I’d still be fine with the preceding sentence. It only took a few months of pacing around my studio apartment - it’s a polite distance to pace for a lazy person though it would look really odd on film -- to realize I was still writing material that I’d like someone other than my brain to.”

For the Heavy Guilt, Howard says, “This band features Josh Rice of the K23 Orchestra, my nemesis and best friend on Fender Rhodes and Hammond B3, and if you listen to the album turned up to 11 in top-notch headphones, you can hear him insulting me, between and during songs. Sean Martin and Jason Littlefield of Skirt Alert take up the electric guitar and upright bass. You may have seen Sean sit in with the K23 a number of times and reinvent the wheel of guitar onstage; he is a sonic wizard and a pleasure to have aboard. Jason Smart, formerly of the Jacob Fred Jazz Odyssey and my dreams - on the rare occasion that they’re about drummers -- handles the kit duties.”

“I write the lyrics, and one of the most important cats I’ve met in recent years, Erik Canzona, sings them the way I hear it in my head as well as handles the acoustic. This band has a very different sound than its parts...it has a warm vintage tone, a rainy-day northeast vibe to it. I love the way it came out. It is my favorite project thus far, and I hope you enjoy it half as much as I. I sold my record collection to fund our run to the studio and didn’t think twice about it.”

The band recorded their debut album at Prairie Sun Studios in Sebastapol. For their sophomore album, they set out to raise $5,000 on Kickstarter.com. “We made our first album with money raised from a yard sale,” says Howard. “I let go of my record collection, Erik parted ways with his Curb Your Enthusiasm DVDs, and Josh even sold his golf clubs.” The resulting album In the Blood was released in July 2011.

A self-titled full-length was released in April 2013. “We decided to have this third record be self-titled, 'cause we feel like we really found our own sound,” says Howard. “If this is the best record I ever make, I can die happy. We're real proud of this one.”

Produced by longtime Howard collaborator Timin Murray, the CD includes guest turns from his bandmate in the Midnight Pine Shelbi Bennett, Andy Geib (the Styletones), Karl Denson (the Greyboy Allstars), and local jazz-sax player Ian Tordella. “The album cover was shot out in Campo and the antique car museum by Kassandra Lynne,” says Howard. “Our singer Erik Canzona does all the layout and graphic design.”

Their Spectral Hearts album, recorded in 2017, was produced by singer/guitarist/songwriter Erik Canzona, Howard, and Jordan Andreen, and mixed at Audio Design). It represents a departure from their previous vintage, soulful sound. “It’s definitely a bit more aggressive and quicker paced,” says Howard. “I think we did a decent job of honoring what we were and trying something different. We used a lot more odd keys and synths on this record, as well as the Hammond and Rhodes sound from prior recordings.”