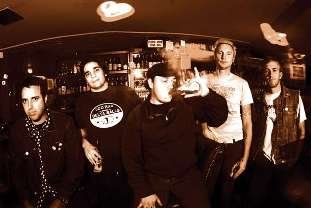 RIYL: The Saints, the Cramps, the Clash

Molded from the neglected scraps of quintessential punk purity. Compressed by greasy, nail bitten hands scarred and bloodied from the rock and roll crusades. Forged in a misguided abuse of high voltage electricity and wound steel. These are the ways of the Heartaches, the most exciting punk combo of today. Their attack is a combo-nation of the crudeties from a vicious punk past where amps buzz with unforgiving noise, and aorta-wrenching pop is mangled unapologetically. A fierce Cro-Magnon ballet on a tightrope between severely inhibited chord thuggery and passionately tuneful rock and roll bliss.

Formed in San Diego in 2000 by professional skater Kristian Svitak, the Heartaches also included singer and guitarist Billy Dee Williams (obviously not Mr. Lando Calrissian himself), lead guitarist Billy Heartache, and bassist El Mano del Diablo. In 2003, the band expanded to a quintet when Williams moved strictly to singing, El Mano del Diablo picked up the rhythm guitar, and Dr. Dean, PhD filled in on bass. Thus situated, the Heartaches played the skate festival circuit and appeared on a number of skate-themed CD and DVD compilations before signing with noted garage punk label Swami Records and releasing their debut album, Too Cool for School, in October 2006.

These San Diego garage punks called the Heartaches are an entirely different band from the Belgian street punk act of the same name who debuted with the 2003 album Lunacy and Devastation on the European label People Like You, followed by 2004's Move On and 2007's Suicide, both on the I Scream label. The Belgian and Californian bands both claim that they had the name first, according to a November 2006 interview with (Belgian) Heartaches singer Tommy X with the online punk zine Mutiny.