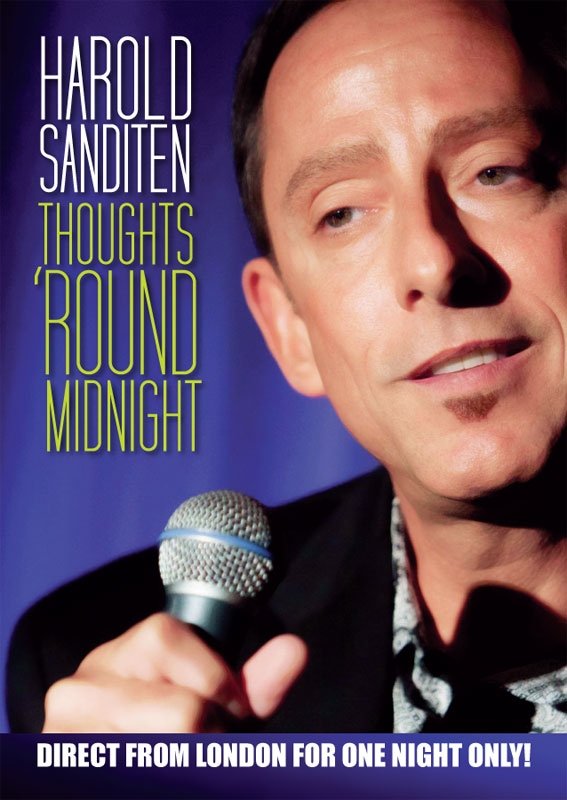 Singer Harold Sanditen has launched cabaret-style musical stage productions like the Secret of Life (performed in the UK and New York in 2008), Love Exposed (UK and New York in 2009 and 2010), and Thoughts ‘Round Midnight (London, UK, New York, and Chicago in 2010 and 2011).

Regarding that latter production, Sanditen says “This show is very comical, and explores those late night thoughts that can keep any of us awake.”

“The seed for the show began to germinate in 2007, when I attended my first cabaret boot camp in Tuscany. I learned that one can sing, as well as tell a story. It’s acting to music. Each song is an individual monologue, with some personal relevance.” Mixing jazz, Latin, pop, ballads, and Broadway theater, Thoughts ‘Round Midnight includes tracks from Sanditen’s 2010 album Taking Flight, as well as songs by Lennon and McCartney, Billie Holiday, Thelonious Monk, Bob Dylan, Jay Leonhart, Dorothy Fields, Stephen Sondheim, and Antonio Carlos Jobim.

While living in San Diego, the former investment banker used to work for the NCR Corporation in Rancho Bernardo. “I was first an Inventory Control Specialist, and then the Manufacturing Systems Control Manager. At that time, NCR was building very large mainframe computers.”

Deciding on a career change, he became a theater producer and moved to the U.K., where he’s currently Vice Chairman of the Board of the London Academy of Music and Dramatic Art (LAMDA). “I loved my time in San Diego. I had my first real job, bought my first house, and basically started my adult life there. I developed a love for theater there as well.”

Sanditen says his next career transition, from producer to cabaret crooner, was inspired by working with “difficult” performers. “I think that all began when I was producing one particularly difficult diva. Then, some more difficult divas came along, and I decided that life really is too short to put up with that kinda shit. I chose to follow my first love, singing.”

As a performer, he says he now understands the diva behavior that used to vex him, and that he’s become a bit of a diva (or rather “divo”) himself. “Whether or not anyone realizes this, it’s really hard work being a diva.”

“In the end, it’s the diva you know, whether that diva wears Prada or nada!”

His album Taking Flight was released in 2010.